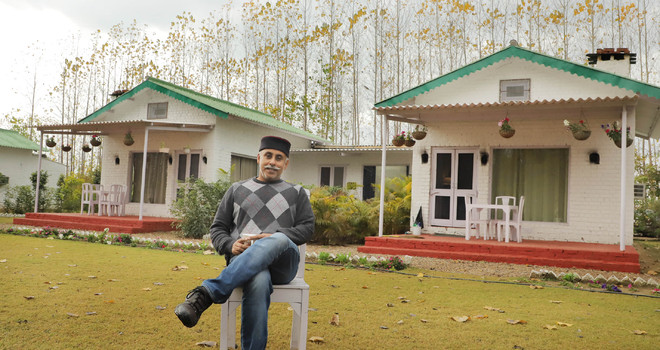 While farmers are largely dependent on the government for adequate pricing and tax waivers, an enterprising agriculturist — Harkirat Ahluwalia — has emerged as a role model for them.

He has diversified into agri-tourism business that ensures him rich dividends throughout the year. He has achieved this by converting his two plantation sites of citrus and poplar trees into farm-stays.

The 70 acre site at Chhauni Kalan, on Chandigarh Road, has AC-equipped nine tent accommodations, another on 15 acres at Firdaus, on Una Road, has seven huts of concrete. Within a span of just a few years, his farm-stays have become extremely popular among NRIs and foreign travellers.

Even Punjab CM Capt Amarinder Singh likes to visit his farms and spend some leisurely hours at his villas, as he did two weeks ago.

Enter his farm at Firdaus and one gets a feeling of an altogether new world. Light classical music also plays in the background. The tables are set up in the garden area between two huts. On a cold, winter day, a bonfire lit up alongside spreads some warmth. One can sight huge citrus plantations a few hundred metres away. Chefs in uniforms come and serve some hot coffee or spiced tea.

Harkirat, who has studied mass communication from PU, Chandigarh, shares: “When I got into my ancestral business of citrus cultivation, I realised that the input costs were increasing and not matching with the static income from the produce. Nothing much could be expected from the Horticulture Department or the governments. So, that was when it struck my mind that we could set up rural homestays here and have guests and foreign farmers from the UK, Australia and other countries, whom we can show trends of citrus plantation in Punjab while giving them a feel of Punjab’s countryside.”

Harkirat adds: “While the tent houses came up in 2008, this one is a new property. Even I am living here and enjoying being in nature. My presence here ensures that all visitors are taken care of well by the staff, all of whom are from nearby villages and have been trained by me. We have many activities for visitors including tractor-trailer rides, fruit plucking, cycling, bush walks and outdoor lunches. We have created set-ups within the plantations, where we arrange for lunches. Our chefs cook on the spot and offer a variety of cuisines as per the demand of the visitors. For children, we have an activity to help them learn how to sow vegetables.”

A diehard supporter of farm protests, Harkirat says he recently sent oranges and kiwis for the protesting farmers. “Being a farmer, I can empathise with them. It is not easy to carry on with such a long protest and that too in such cold weather. I believe that autocracy cannot work in the country and it is wrong to thrust laws upon farmers. Our PM could have been sensitive. He should understand that governments are not just meant to do business, they have social obligations too. He should have spoken to farmers before finalising the draft.”

Budget comes at a time when Punjab’s per capita social secto...