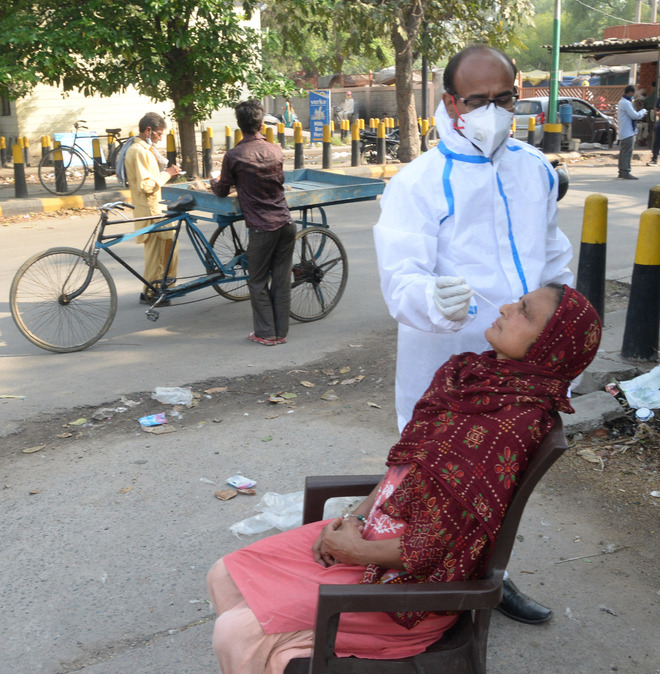 The health authorities reported 950 positive in Jalandhar district on Thursday. With this, the total cases increased to 47,404. It’s for the first time that nearly 1,000 cases surfaced in the district, which is the highest single-day rise ever witnessed since the pandemic hit the nation.

The highest number of deaths during the Covid second wave were also reported in the district today. A total of 12 persons lost their lives, thus taking the toll to 1,134.

With hospitals already making do with bare minimum in terms of oxygen and supply of essential medicine (Remdesivir), the continous spike in cases, surpassing previous days’ numbers, has been giving sleepless nights to health officials and the administration.

While Level-III Covid beds in the district were filled to 80 per cent capacity on Wednesday, the record rise in cases along with the influx of patients from other states has had many hospitals complaining about deteriorating situation.

Until yesterday, the district had 5,260 active cases which, with 950 more positive cases has risen to 6210. Due to the strike by the NRHM employees, formal health bulletin was not released in the district today.

Of 950 people who tested positive today, majority were between 30 years to 45 years.

The district reported two more Covid-19 fatalities on Thursday, taking the death toll to 764, while 237 new cases pushed the infection tally to 21,912. Civil Surgeon Dr Ranjit Singh Ghotra said the number of active cases was 2,052, while 19,096 patients had recovered. On Thursday, 29 positive patients belonged to Hoshiarpur city, while eight cases were reported from other districts and remaining 200 patients were from other health blocks of the district.

The total number of samples of Covid-19 taken in the district till date is 4,71,509, of which, 4,46,867 were negative, while 5,960 report were still awaited and 202 samples were invalid. Among the dead were a 52-year-old Hajipur village resident, who died at a private hospital in Jalandhar, and a 28-year-old Chhatta Bazaar Hoshiarpur city resident, who died at Civil Hospital, Hoshiarpur.

The district reported 240 positive cases and five deaths on Thursday. Among those who lost their battle against the deadly virus were five residents from Phagwara city aged 30, 52, 62 and 72 years. A 75-year-old woman from Kasso Chahal village of Kapurthala was also among the victims. The death toll has touched 355, while the number of positive cases now stands at 13,086. The district now has 1,055 active cases after the discharge of 124 patients from various hospitals.