Rehearsal in full swing for I-Day in Jalandhar : The Tribune India 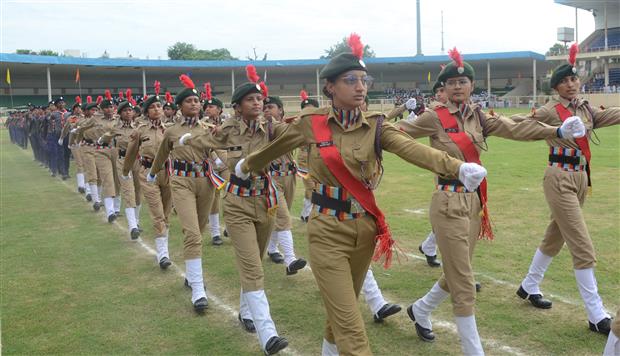 NCC cadets march past during a full dress rehearsal ahead of Independence Day in Jalandhar. Photos: Sarabjit Singh

Three days ahead of the 75th Independence Day celebrations, a full dress rehearsal was held on Friday at the local Guru Gobind Singh Stadium, where Deputy Commissioner Jaspreet Singh hoisted the national flag and took salute of the march past.

Local Government Minister Dr Inderbir Singh Nijjar will preside over the district-level Independence Day function to be held on August 15 at the stadium. The full dress rehearsal witnessed the march past, PT show, scintillating cultural activities displaying the patriotic ferver including giddha and bhangra. The march past comprised the contingents of ITBP, Punjab Police, Punjab Homeguards, NCC cadets, scouts and girl guides.

After the rehearsal, the DC also held a meeting of the district administration, where he gave detailed instructions to make the Independence Day celebrations a great success. After a gap of two years, this time students’ activities, including choreography and dance on patriotic songs, giddha and bhangra, besides mass PT show, are being made part of the celebrations, he added.