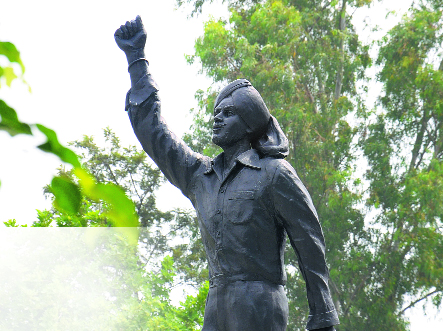 A statue of Shaheed-e-Azam Bhagat Singh outside the Museum and Memorial named after him at his village — Khatkar Kalan — in Nawanshahr.

‘Hawaaon mein rahengi mere khyalon ki bijlian, ye musht-e-khak hai fani, rahe rahe, na rahe’ (physical existence does not matter, the life will be finished, but my ideas will remain forever). Shaheed-e-Azam Bhagat Singh would often recite lines, which stand true even today. He even used these lines in the last letter to his brother to console him.

The martyr was born on September 28, 1907, at Banga Chak No. 105 G, Jarranwala, district Lyallpur (now in Pakistan), and died at the age of 23. Even after years, the revolutionary remains an inspiration.

One of the main attractions is a huge hall replicated as the Jallianwala Bagh. The massacre has been depicted through blood-stained life-size fallen statues. In Punjab timeline gallery, several movements that were started in Punjab and inspired Bhagat Singh have been explained. There is another attraction, in which one can listen to a six-minute interview of Bhagat Singh’s mother that was broadcast in the ’60s, where she talks about his life. The valiant action of Bhagat Singh of first throwing the pamphlets and then bombing of the Assembly is also shown. The moment one enters, sensors fitted on the floor leads to a shower of re-printed leaflets, sound of slogans of Inquilab Zindabad with a huge rumbling. The trial room is abuzz with the narration of eminent voice-over artiste Shammi Narang. The last part of the gallery shows the execution of Bhagat Singh, Rajguru and Sukhdev in a dark room, controlled through a remote device.

Bhagat Singh left DAV School, Lahore, in 1921, when he was in Class X and joined the National College, Lahore. Initially, his command over English was weak, while he excelled in history and politics. With perseverance, he mastered the language, possibly realising it as an essential requirement to counter argue and fight against the British Raj. The books that were most popular among college students, include ‘My struggle for Irish Freedom’ by Den O Bren, biographies ‘Mazzini’ and ‘Garibaldi’ and ‘History of French Revolution,’ among others.

A wall of the museum tells about the journey of Bhagat Singh as a journalist. He first worked at ‘Pratap’ in Kanpur and then with ‘Kirti’ journal in Punjab. During his escape to Delhi to flee police attention, he found a job in ‘Vir Arjun’ newspaper. He used several pen names, including Balwant Singh, Vidrohi and BS Sidhu. He is known to have written in four languages — Hindi, English, Punjabi and Urdu.