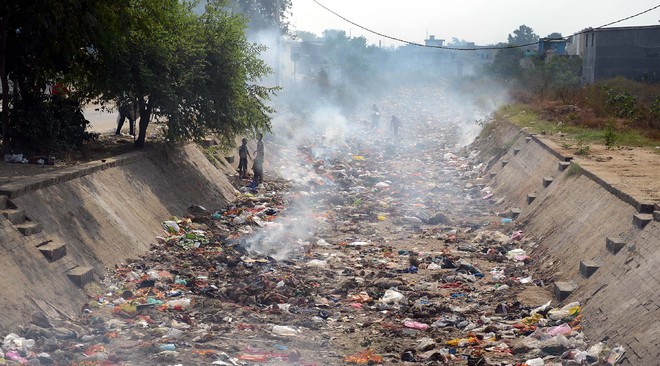 Caring two hoots for the pollution norms, the residents of areas around Bist Doab Canal have been dumping waste into it and then even setting it on fire, adding to the problem of already prevalent smog like condition in the city.

Various localities including Janta Colony, Kalia Colony, Shaheed Bhagat Singh Colony, Guru Amar Dass Nagar and Maqsudan fall near the banks of the canal, which is used as a distributary by the irrigation department for the farmers during paddy sowing season.

Now that the water supply through the canal has been stopped, some residents of these areas and passers-by have converted it into a garbage dump. The shopkeepers of sabzi mandi and fish market, too, are in the habit of dumping waste into the canal.

Rag-pickers are seen daily walking in the concrete-lined canal, picking polybags, paper and recyclable stuff. The irrigation staff deploys MGNREGA workers to clean up the canal ahead of monsoon season and then leaves it unattended for the rest of the year.

Baljit Singh, a resident of Kalia Colony, said: “The filth piling in the canal has become a perpetual problem. The garbage piling makes us prone to diseases while smoke emanating from it is further aggravating the problems. The authorities concerned have only been passing a buck on the issue while we are suffering. The irrigation department blames it on the Municipal Corporation while the MC authorities say that it was the duty of the irrigation department to keep the canal clean.” An irrigation department official shared that there was a plan to do fencing around the vulnerable points of the canal after its proper cleaning, which could take some more time.

Atrocities are being unleashed on the farmers: Sombir Sangwa...