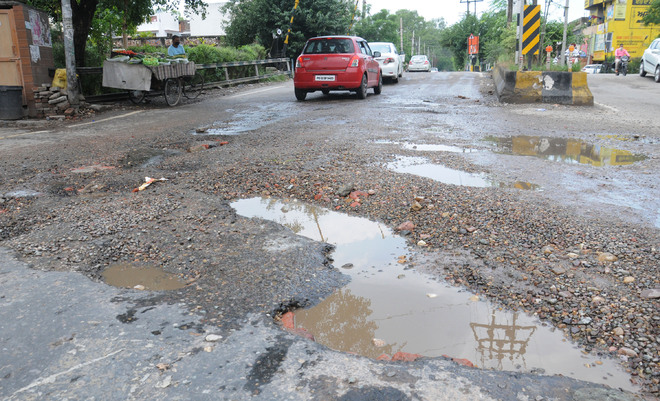 One of the busiest roads — Ladowali Road (from BSF Chowk to Madan Flour Mill Chowk) — is lying in an utterly poor condition for the past several years.

A quick tour revealed that it has been broken from several places and there are countless pits on the road, especially towards the Alaska Chowk side, posing a grave threat to the lives of commuters.

The road is also the main route to the District Administrative Complex, SSP (rural) office and residential colonies and has a government school as well as a number of commercial businesses based on it, but still, no one bothers about its maintenance. Moreover, the condition of the road belies the tall claims of Municipal Corporation (MC) and represents the sorry state of affairs of the so-called Smart City Jalandhar and its beautification.

According to Surinder Saini, secretary, Jalandhar Welfare Society, who has his residence on Ladowali Road itself, said this road was repaired in 2014 during elections, after which nobody bothered to have a check on it or cared about its maintenance.

“Recently, the MC laid gravel on both sides of the road and said the construction of the middle path of the road will begin soon. However, we doubt as to when the work would begin,” he said.

He said apart from the poor condition of the road, the encroachments on the footpath and in parking areas by car scrap dealers was another big problem for residents, shop owners and visitors.

“The MC must remove these encroachments as these, too, act as big hurdles why the re-carpeting on the stretch doesn’t last very long,” he said. “At many times, vehicles get stuck on broken roads. Potholes add to the woes of commuters. People riding two-wheelers were injured on this road in the past. On a rainy day, rainwater gets accumulated for a long time. There is no use lodging a complaint with the MC, as we know nothing will be done,” said Manoj, a shopkeeper at Alaska Chowk.

Surinder Singh, who has his car batteries shop on the road, said no repair work has been executed since long and the complete stretch of the road has worn away, leading to an uneven road surface.

“Even drivers face a tough time while driving, as the road is covered with potholes and stones scattered on its surface,” he said.

Singh said he had many times witnessed how glass doors at their shops or car glasses have broken and even people have been hit as an occasional scattered stone darts into the glass panes or vehicles. “Besides, the dust entering shops further adds to our woes and make our lives miserable,” he said.

Many people have also met with accidents on this road in the past. Narinder Singh, who recently fell from his bike after being hit with a pothole on the road said: “When a vehicle suddenly comes from the opposite direction, you take a turn in haste. The same happened with me. I took a turn in haste and got hit by a pothole and injured my hand,” he said.