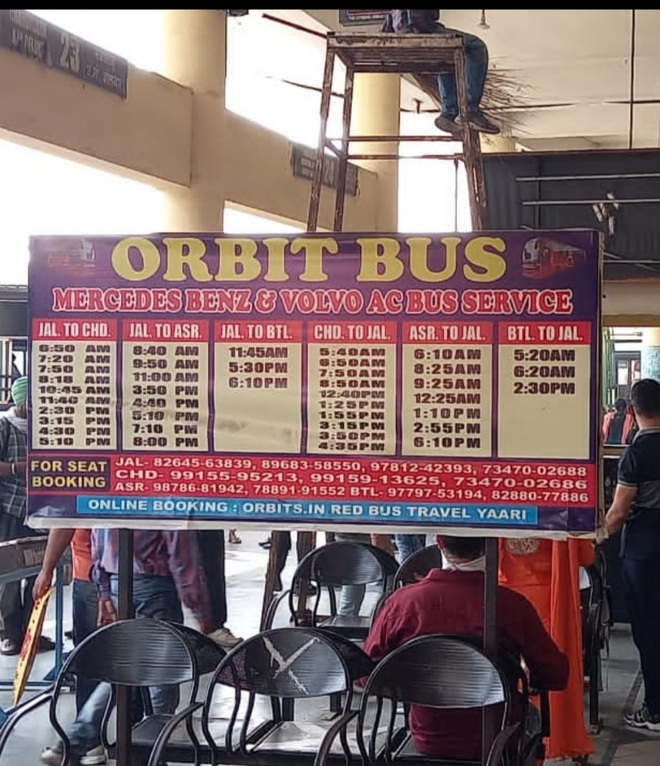 The timetable of Orbit buses, inside the bus stand, that was removed by the roadways staff on Saturday.

The ‘big action’ taken against private bus operators has led to increase in revenue of Punjab Roadways and PRTC buses.

In the past two weeks, the gross revenue of roadways buses has almost doubled. Considering the figures provided by roadways officials, there is an average hike of 30 per cent in daily revenue.

As per Punjab Roadways depot officials no new buses have been inducted in their fleet. To accommodate more passengers, Punjab Roadways has repaired damaged buses parked inside workshop. Renovated buses of both roadways depots of the district are now plying on roads, taking the fleet count to 210. Earlier, only 150 to 160 government buses were operating.

Mandeep Manchanda, an official of Jalandhar roadways depot No. 2 and in-charge of bus stand said, following stern action against private buses plying sans permits there was a hike of nearly 30 per cent in revenue of Roadways buses.

“At present, buses are running to full capacity. Not only routes of buses have increased, but also passenger flow has doubled. Compared to previous months, roadways buses are at present earning a profit of Rs11 to Rs12 lakh per day. Excluding free tickets of woman passengers, roadways buses are generating revenue of nearly Rs7 lakh daily from male passengers,” Manchanda added.

“Earlier, in the corresponding months, daily revenue of buses hardly used to cross Rs4 lakh. After directions of Transport Minister Amrinder Singh Raja Warring, the monopoly of private buses on time tables has also been curtailed, which is directly benefiting Punbus and PRTC buses,” added Manchanda.

On Saturday too, the Roadways staff removed the time table chart of Orbit buses, which was illegally pasted inside bus stand for the past few years. The removal of the banner of Orbit Mercedes and Volvo AC buses with mobile phone numbers of bus operators was being considered as a warning to private buses operators.

The bus stand in-charge also informed that a limit had been fixed on routes of private buses and their presence inside bus stand.

Surprisingly, it was only after Warring’s action that hoardings of many private operators installed in vicinity of the bus stand are now missing.

The Jalandhar Roadways depot No. 1 General Manager, Paramvir Singh, said depot buses were generating daily revenue of nearly Rs7 lakh. In a joint operation, along with Regional Transport Authority (RTA), around 20 buses without road permits were challaned and two impounded, he added.