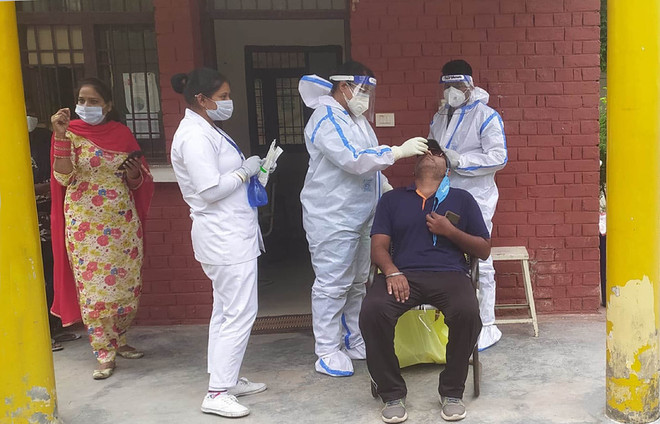 With Covid cases also being reported from far-flung areas of the Kandi belt falling in Hoshiarpur and Nawanshahr, it has become a cause for concern for villagers residing here.

Villagers say that they have to travel a distance of 15-30 km to reach a health centre to get their check-up done. Given the long distance, most of them avoid timely treatment and prefer to stay back at home. The dithering results in a serious health problem, which sometimes leads to the death of patients.

Rajwinder Singh Lucky, an activist from Balachaur, said, “We get to know about five to 10 cases daily in many villages of Kathgarh and Saroya blocks, which fall in the kandi area. While these are the official figures, there are many who do not even go for getting their tests done.

“Owing to carelessness and lack of health facilities in their vicinity, some lives are also being lost. The Kathgarh hospital, which caters to a population of 50,000, has no doctor. There are no proper facilities at Saroya. Patients have to rush to Balachaur town, which is 15-25 km away from the kandi area. For the past two days, we have seen two deaths in Balachaur villages and thing seem to be going worse.”

Things seem to be getting worse in the kandi area of Hoshiarpur. Sarpanch Gurbachan Singh of Kukanet village said the nearest medical facility for them was at Hariana or Banga, which is 25 km from here. “There is a dispensary at Dehria village, which is 11 km away, but there is a jungle and a water body falling on the way and no one prefers to go that way. A new dispensary has been set up at Janauri village, about 16 km from here, but the facility is only for vaccination,” he said. Manit Malhotra, who represents the welfare society of Kukanet, said, “As Covid-19 is surging in rural areas of Punjab, it will be difficult to save lives of people living in the vicinity of these villages as no medical facility is provided there.

“Immediately oxygen concentrators need be installed for emergency along with other basic infrastructure. Kukanet, which has a population of 2,200, has a building available but no medical facility is provided here. We have written to the authorities repeatedly but to no avail. The dispensary at Dehria used to cater to about 55 villages and nine nearby villages of Kandi but it is not functioning owing to lack of doctors, affecting the health of more than 20,000 people. After sunset, no one can go downhill as there is no road and provision of electricity, besides the lurking danger of wild animals.”

Ex-MLA Sham Churasi Mahinder Kaur Joshi said, “As per today’s report, there have been 13 cases in the area. So far, the situation is okay but if tomorrow this area gets affected, it will be very difficult to handle it. Even today, patients have to commute by bikes on uneven roads to reach hospitals situated around 20 km away. There are just rural buses plying in this area, which are of no use in emergency situations.”