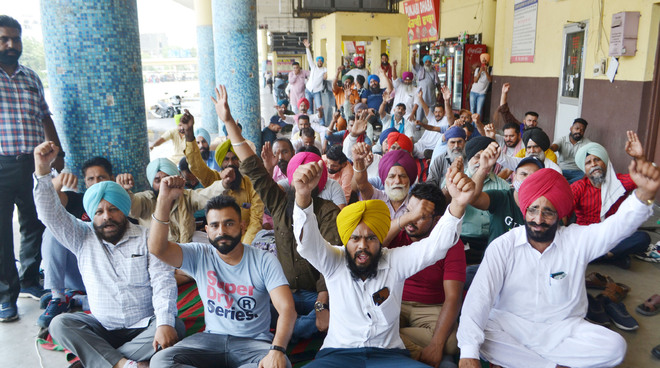 Roadways staff hold a protest in Jalandhar on Monday

Passengers on Monday had a harrowing time at the city bus stand after staff of the PRTC and the Punjab Roadways announced their three-day chakka jam strike throughout the state. While PRTC and Punbus buses remained off the roads, private buses overcharged passengers.

Intensifying their protest, the contractual workers’ union of the Punjab Roadways started their protest at 8 in the morning and kept the bus stand and roadways depots closed for four hours. The protesters stated that they would continue their protest for the next three days and would gherao the Moti Bagh residence of CM Capt Amarinder Singh. The union members stated that the protest was held across 18 roadways depots in the state and at seven PRTC depots.

Despite the fact that the government had termed justified the demands of Punbus employees at various occasions, nothing had been done to implement them, said the protesting drivers and conductors.

Gurpreet Singh, a union leader, said, “As per the law, the services of a contractual worker must be regularized within 240 days of his/her job, but their services have not been regularised though they have put in many years of their services. We have been working on meagre salaries, but the government is not doing anything for us.”

Another member said there had been no addition to the Punjab Roadways’ existing fleet over the years. The general secretary of the union said the main demands that needed immediate attention were implementation of the Supreme Court’s guidelines of equal wages for equal work and the Punjab and Haryana High Court’s orders regarding the cancellation of driving permit of private buses and the regularisation of the services of the contractual workers.

Besides, the secretary said they had also put forth the demand to cover workers under the Punjab Pension Scheme, loan waiver of Punbus and DA to be given to all drivers and conductors.

Meanwhile, a meeting of the SCBC Union of Punjab Roadways was held under the leadership of Guru Naam Das, a permanent worker of the roadways employees union, at the city bus stand. Even after four years, the government could not ban any type of mafia. And no outsourcing workers were being regularised. “Corruption is rampant in the Transport Department. Employees are not being promoted.

The bodies of new buses should be taken from good agencies. New staff should be recruited in the roadways. The government deliberately delayed the recommendations of the Sixth Pay Commission and so is the case with the transfer policy,” said Baljeet Singh, president of the union. Manjeet Singh, Kuldeepak, Ramandeep Singh and Salwinder Kumar attended the meeting. The SCBC union supported the strike initiated by the Punbus union.