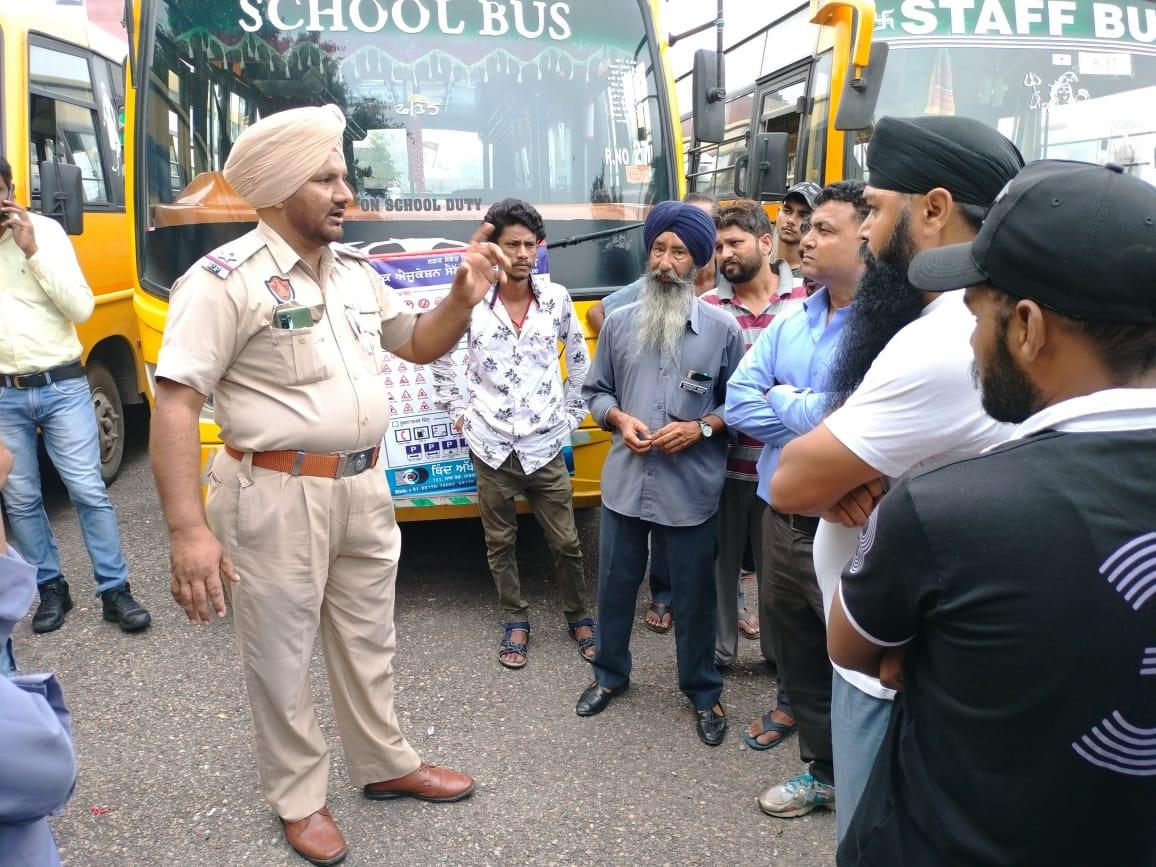 Jalandhar: To spread traffic awareness at Innocent Hearts, Nakodar Road, Loharan, an awareness seminar was organised by the traffic education cell for the school bus drivers under the ‘Safe School Vehicle Scheme’. In the seminar, ASI Shamsher Singh and Head Constable Jasveer Singh apprised everyone about the ‘Safe School Vehicle Scheme’. Shamsher Singh administered the oath to all the bus drivers, conductors and helpers that all of them would follow the traffic rules as their duty. He explained to everyone how they should behave with the students and parents. He answered the queries of the drivers present on the spot. School Principal Shallu Sehgal, transport in-charge Neeraj Kumar and senior transport in-charge Satish Kumar were also present on the occasion. Principal Shallu Sehgal said the traffic police were doing a great job by organising such awareness seminars.

Orientation programme was organised in DIPS IMT to welcome the new students. During the programme, director of DIPS colleges KK Handoo, and Principal Ravi Sidhu, informed the children about the rules of the college and ways to achieve success in life. At the start of the programme, Handoo told the children that how we can improve our personality by bringing changes in various mediums like communication, attitude and thinking. Director KK Handoo said, “Time management is very important in the life of a student because through this we can make complete balance between our studies and other activities.” For the overall development of a student, it is necessary that they maintains a balance between his studies, sports and hobbies. Giving information about SWOT analysis to the students, he told that through this we can keep complete information about our strength, weakness, opportunities and future threats. The children were given information about various language classes being held in the college like English spoken, French, etc.

Under the guidance of Principal Ajay Sareen, a Capacity Building Workshop was organised at HMV Collegiate Sr Sec School in collaboration with Punjab State Council for Science and Technology and Wipro Foundation. The workshop was commenced with lamp lighting. Principal Ajay Sareen welcomed the chief guest Dr KS Bath, Joint Director, Punjab State Council for Science and Technology, Dr Mandakini, scientific officer and Ashish Shah, an expert from Wipro Foundation. She cordially welcomed all the participants and said that the workshop would definitely amplify their knowledge and the teachers from other states too will get benefitted from this gained knowledge. She stated that we should always devote to the cause of environmental protection and contribute in every possible way to conserve it. The college has installed waste paper recycling unit, organic manure and waste material manure machine. In his address, the esteemed chief guest averred that the contemporary age is the age of innovation and to upgrade ourselves in all facets of knowledge is the utmost requirement. While expressing his enlighting views on biodiversity and solid waste management with the teachers, he talked about the ways to conserve endangered flora and fauna. He pinpointed that solid waste is a global problem which adversely impacted our lives and environment and it needs to be rectified with reusing, recycling the product, segregating waste and composting and say no to plastic. He appreciated the constant efforts of HMV to benefit society and encouraged the team to carry forward this legacy. Ashish Shah said that Azim Premji Wipro Foundation focussed on creating just, equitable, humane and sustainable society and every major step is to be taken to empower the teachers. Through the workshop the teachers could develop interesting and practical activities to join students in this endeavour to save environment. He emphasised not to use plastic. In her vote of thanks, Meenakshi Sayal, school coordinator, said nature climate and people should be in sync because protecting nature is not only an environmental issue but also a developmental, social and ethical issue. She quoted the practical example of eco-garden of HMV Collegiate School which is maintained beautifully with the constant efforts of faculty and students. The stage was conducted by Sukriti Sharma.

The NCC cadets of Air Wing brought laurels to Lyallpur Khalsa College, Jalandhar, by winning the first three positions in the combined annual training camp. Principal Gurpinder Singh Samra congratulated the cadets and their ANO Manpreet Singh Lehal. He encouraged them to serve the nation by becoming better humans and wished them success in all walks of lives. CATC-51 was organised at Lovely Professional University. A total 45 cadets of Lyallpur Khalsa College attended the camp along with flying officer Manpreet Singh Lehal under the aegis of 1 Pb Air Sqn NCC Jalandhar. Cadets participated energetically in drill, weapon training, weapon drill, skeet shooting, range firing and sports like basketball, volleyball, athletics and tug-of-war. Cadets won first position in drill competition, tug-of-war and volleyball. Ishpreet Singh Dhillon was chosen as the best cadet and Santokh Bhardwaj was declared best firer. Cadets also displayed their talent in group bhangra and dances during the cultural rounds. Dr Manpreet Singh told about the rigorous training schedule followed in the camp and appreciation of LKC cadets by the wing commander. The jovial students expressed their thanks to Principal Samra and ANO Lehal for their incessant support and guidance.

Kanya Maha Vidyalaya cadets went in good strength to attend a 10-day annual training camp, which is compulsory requirement for those who are to appear for B and C-certificate exam. Along with the training many competitions were also organised during the camp in which KMVites brought laurels to their institution. In the layout line area competition, KMV was awarded the first prize. Shruti Singh got the second prize in firing competition. In the guard of honour competition, KMV won the second prize and the cadets won second prize in tug-of-war competition. Shruti Kanwal and Harvinder Kaur were selected for Independence Day celebrations at Delhi. Yashika Sharma has also been selected for Thal Sena Camp at Delhi. Vajinder Kaur and Shanti Singh were declared the best cadets for the camp. Vajinder Kaur was also awarded for being the camp senior. Principal Atima Sharma Dwivedi congratulated all the cadets on their achievement. The Principal lauded the efforts of Lt Seema Arora, in-charge NCC, for guiding and mentoring the students.