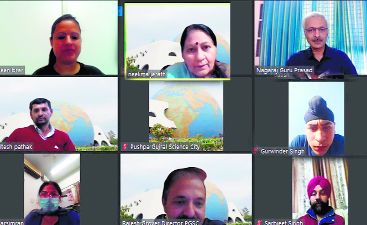 Around 100 students and teachers participated in the event. Giving introductory remarks at the occasion, Neelima Jerath, Director General, Science City said Darwin’s Day is celebrated to commemorate the birth anniversary of Charles Darwin and his significant contribution in the fields of science and humanity.

His theory of evolution helped to dispel conventional belief that the formation of various species was a supernatural phenomenon. His book on ‘The Origin of Species’ is considered to be the foundation of evolutionary biology. It provided many answers to doubts that had arisen about the true age of the earth and the extensive fossil collection that had been discovered. Further, the day is meant to inspire masses to understand the importance of the scientific thinking, build curiosity to find new things and hunger for truth, she said.

NG Prasad, professor, Biological Science and Dean International Relations and outreach, IISER Mohali, was the key speaker. He said the beautiful diversity that everyone sees around is a result of billions of years of evolution. He highlighted the importance of the work of Charles Darwin and Alfred Russel Wallace in describing evolution of spotted camel. He said people outside Africa called Giraffe as “Camel-Leopard” or “spotted camel” for its camel-like neck and leopard-like spots, when they saw it for the first time. Long neck of the Giraffe has resulted in some very peculiar anatomical features such as an extra large heart, long cranial nerves etc. The quest to explain the long neck of the giraffe helps us understand the complex beauty of evolution, he said.

Rajesh Grover, director, Science City, said works of Charles Darwin have had a tremendous impact on the science of anthropology. Many problems of human evolution, human variation, heredity and environment have been investigated following Darwin’s ideas and findings.