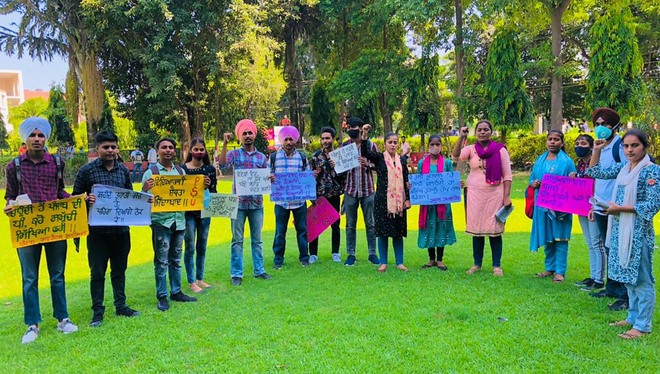 Members of the PSU hold a protest in Jalandhar. Tribune Photo

As part of the statewide call, a protest was held by members of the Punjab Students Union at the Lyallpur Khalsa College, Jalandhar, against the recent renovation of the Jallianwala Bagh.

The students also submitted a memorandum to ADC Hardeep Singh on the issue. Varjeet Kaur, district president of PSU, said the Jallianwala Bagh was a symbol of the fight against the establishment. But the government had tried to distort it, which was an attempt to silence the battle that the Indian people waged against Britishers in their pursuit of independence.

The protesters demanded that the original structure and form of the Jallianwala Bagh be restored. Ramandeep Kaur, district secretary, and student leader Sonia said PSU also demanded that under post-matric scholarship scheme, Dalit students be able to get admission without fees and economically backward class (EBC) students be included on the portal.

“Dalit girls remain devoid of education as much of the education system has been privatised. The number of government educational institutions is constantly decreasing. On top of it, exorbitant fees are being charged from students,” Ramandeep rued.