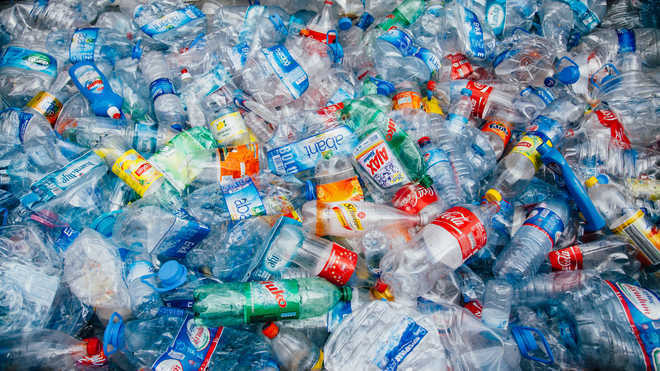 Even as the government has announced a ban on single use plastic from July 1, the social activists from Jalandhar who have been relentlessly carrying out campaign against the use of plastics have been asking many questions, most of which remain still unanswered.

But the activists are asking why is there no mention about mineral water bottles which are sold in such a huge number on daily basis. “Disposal of mineral water bottles is a problem not just for India but across the world even in cities like California and Los Angeles. It is high time that everyone is encouraged to carry along a water bottle while leaving from home and refilling it from public water dispensers and coolers. We all need to get to this habit or else it will be very late,” said Navneet Bhullar who is co-founder of NGO Action Group Against Plastic Pollution (AGAPP).

She questions further: “Is it not more important to talk of plastic bags and bottles rather than laying so much emphasis on smaller items like ear buds with plastic sticks or straws and plastic cutlery? I have met the Chairman of Punjab Pollution Control Board in this regard today and he has assured me that the ban will also be implemented on plastics of less than 100 microns. So, July 1 is here and the seriousness of the government on the issue would surely be gauged or else we will swing into action once again”.

Another city-based activist Meenal Verma said: “It is good that the government is set to ban single use plastics from July 1 but I really want to ask the officials as to whether are they going to check the stocks of the retailers and wholesalers who had been dealing in such kind of plastics for years. Alternatively, we have a solution for them all. We are ready to pick all such items from the market and collect it with us. We will then send it to polyfuel industry either in Bilaspur, Mumbai or Bengaluru for conversion into fuel.”

She has further said: “For years, I have been spreading awareness asking people to pack up their own tiffins, cutlery, bottles etc from home before they leave for travel. Slowly this change is setting in and people are getting used to it. But a bigger problem emerging is the mixing of materials. For instance, the outer cover of a potato chips packet has three to four layers including that of foil, plastic and paper. All these materials have to be disposed of in a different manner but the point is that these layers are too difficult to be separated. So, the government must also come up with a solution to such like problems and issue suitable instructions to the manufacturers”.

Asked about any directions reaching the administration regarding actions to be taken for implementation of the ban on single use plastics from July 1, Deputy Commissioner Ghanshyam Thori said: “Such directions usually go to the Municipal Corporation offices.” Meanwhile, MC Commmissioner Deepshikha has proceeded on a long leave.