Snakebite cases on the rise in Kapurthala; 130 in April alone! : The Tribune India

Snakebite cases on the rise in Kapurthala; 130 in April alone!

509 incidents reported in district last year, 282 until May this year 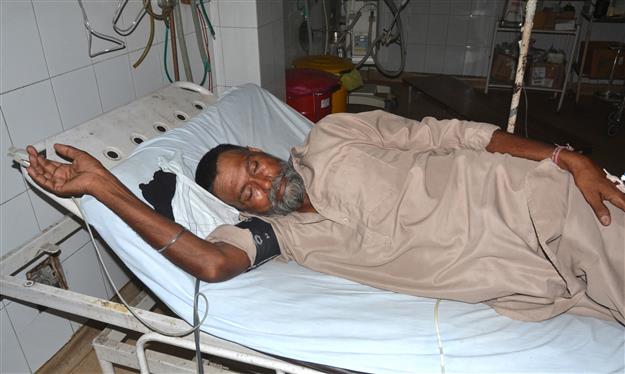 A snakebite patient at the Civil Hospital in Jalandhar. Tribune photo

A whopping 130 cases of snake bites were reported in Kapurthala in April alone! With 130 cases in April and 72 in May, the snakebite incidents have registered a steep hike this year so far.

Last year, there were two deaths and 161 victims were admitted to the hospital. This year, there have been 62 hospitalisations so far, but no deaths.

Kapurthala Civil Surgeon Dr Gurinderbir Kaur today asked residents to exercise caution in view of the increasing number of snake bites. Issuing a detailed advisory, she asked people not to resort to myth-mongering or seeking advice from witchdoctors in the eventuality of a snake bite and to rely only on medical help.

She said of over 50 species of venomous snakes in the country, three are found in the state — Cobra, Russell’s Viper and Krait. In a snake bites on the leg or arm, one should avoid move the affected area with the help of a splint (a device to hold an injured area stable in the event of an injury). All kinds of accessories — kadas, bangles, bracelets, socks, shoes, gloves, etc. should be removed from the area.

She cautioned that one should never try to suck out the poison, nor take out blood from the snake bite wound, nor press or massage herbs or any medicine in the affected area. She also asked people not to give anything to eat to the person who has been bitten as it would cause the poison to spread faster.

The civil surgeon said in the event of a snake bite a patient should be taken to the nearest hospital, where snake anti-venom vaccines are available. She also said in such a situation it was imperative that people kept their calm and the patient is not spooked regarding the snake bite. Taking the patient to healthcare as soon as possible should be the top priority.

Anti-venom injection counters the venom in the body