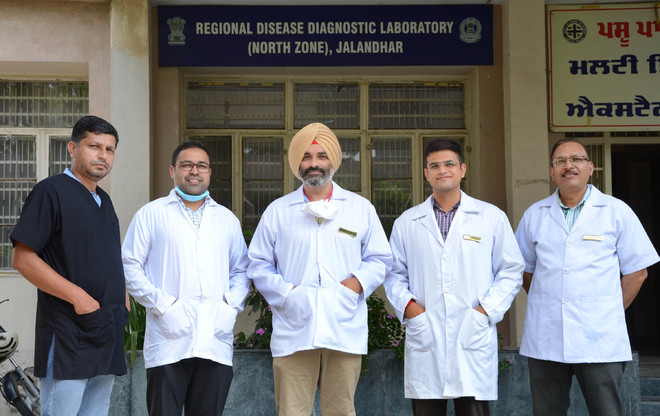 A team of veterinarians from Regional Disease Diagnostic Laboratory, which will be conducting Covid tests in Jalandhar.

Accompanied by the Vice-Chancellor, Baba Farid University of Health Science, Faridkot, Dr Raj Bahadur, Special Secretary (Animal Husbandry) Manpreet Singh Chhatwal, Deputy Commissioner Ghanshyam Thori, Commissioner of Police Gurpreet Singh Bhullar, the minister said the laboratory would carry out 1,000 tests per day. He said with the opening of four labs today, the testing capacity in Punjab will touch the mark of 16,000 tests daily, which would further lead to containing the spread of contagion by ensuring timely detection and treatment. The minister said a dedicated team of the experienced doctors and scientists had been stationed here besides providing requisite medical equipment, lab staff and others for the Covid testing by Baba Farid University of Health Sciences, Faridkot. Soni said with this facility starting here now there would be no need to send the samples to other places and would help the local health department for start testing, tracing and treatment at the earliest.

In Jalandhar, as many as 156 positive cases were reported on Monday, while only six positive cases emerged from Kapurthala. Nawanshahr had 14 new cases, including one pre-operative case and a cop.