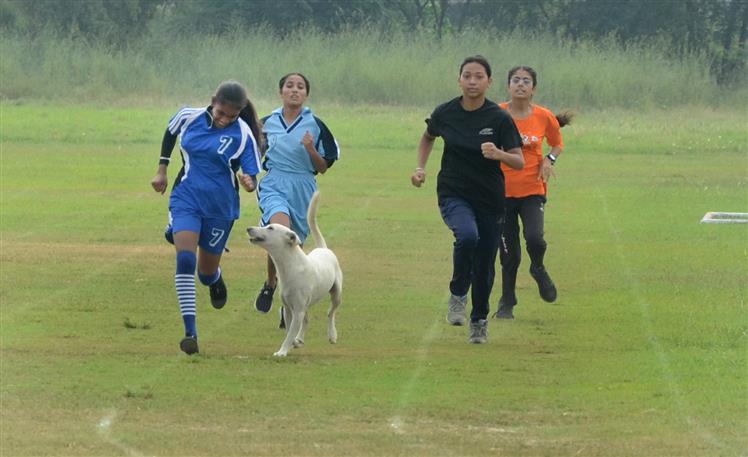 Stray dog menace has gripped Jalandhar badly and the same could be gauged from the fact that no place in the city is safe anymore, not even the playgrounds where ‘Khedan Vatan Punjab Deyan’ games were underway.

On Wednesday, the girls who participated in the 400-m race, had a narrow escape after being chased by a stray dog that jumped on the racing track while the participants were competing at the DAV college playground near Maqsudan. The incident not only put a spotlight on the poor state of affairs in the city, but also raises serious questions over the management in regard to the safety of the participants.

Bite cases on the rise, MC in deep slumber

A few days ago, the Jalandhar Tribune reported that daily 35 to 38 dog bite cases on an average were being reported at the Civil Hospital, however, the Jalandhar Municipal Corporation has failed to address the issue. Residents are complaining about the exploding population of dogs in the city and how commuting on roads or even walking in parks is no longer safe as packs of dogs could be seen roaming around, but all the pleas seem to be falling on deaf ears.

Talking to the Jalandhar Tribune, a few players, who participated in different games, requesting anonymity, informed that it was not just one day they were welcomed by stray dogs at the playground, rather the dogs could be seen sitting or mellowing out in the playground daily. They said presence of dogs on the racing track not only disturbed their concentration but also posed a great threat to their lives.

Even on Thursday, when the Jalandhar Tribune team visited the playground, the situation was no different, stray dogs were seen roaming around in the playground giving a hard time to players. “The presence of stray dogs in the playground is a serious concern. Even the thought of being bitten by a dog in the middle of a race gives goosebumps, so just imagine, what we had to endure every day,”said a player.

District Sports Officer Lovejit Singh, meanwhile, said the best facilities were being provided to the players, and all the games were taking place under the supervision of international coaches. He said the playground was the best in the city, and all measures were being undertaken to ensure safety of the players.

“The ground is enclosed by boundary walls, and even security personnel were deployed. There is a drain flowing at the back of the ground, it seems the dog entered from that side. We will enhance the security to ensure players face no such problem,” he added.