Around 180 cases reported in the past 25 days, while only 106 such instances happened till May 12 last year 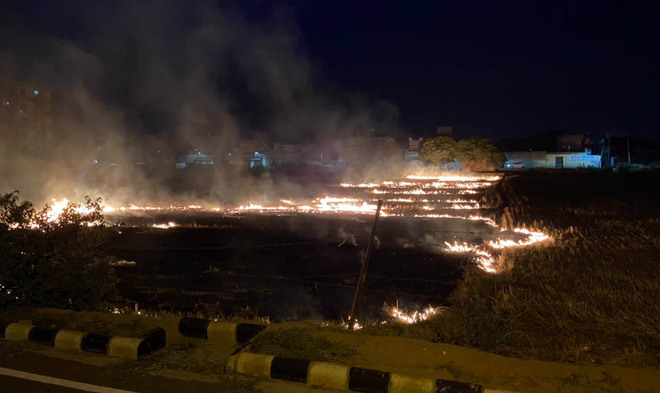 Ahead of the sowing of the kharif crops, farmers in the region have started burning wheat crop residue. Tribune photo: Sarabjit Singh

Even as the agriculture-cum-environment experts cautioned against the stubble burning last year amid rising Covid cases, there seems to be no check on the stubble burning incidents in the district. Ahead of the sowing of the kharif crops, farmers in the region have started burning wheat crop residue.

Environment Engineer, Kuldeep Singh, while confirming the rampant cases of stubble burning in the district, said, due to the farmers’ protest, action couldn’t be taken against those setting their fields on fire.

Sanjeev Nagpal, an adviser to the Union and Punjab Government on crop residue management, last year stated that if alternate arrangements to stubble burning were not made, pollutants such as particulate matter and toxic gases such as carbon monoxide and methane could give rise to severe respiratory problems which could worsen the Covid-19 situation as the virus attacks the respiratory tract.

Considering the deadliest second wave of coronavirus, which is impacting lungs directly, immediate attention needs to be paid to curb the burning of crop residue.

On a visit to some villages near Kartarpur, it was found that the fields were set on fire. Agriculture officials said according to the NGT guidelines, the pollution board will get information about stubble burning through remote sensing devices. “Owing to the pandemic, an action taken report application has been put into effect to keep a tab on stubble burning. Nodal officers get alerted through remote sensing devices. They further inform about the location to the patwaris of the villages,” said Naresh Gulati, an agriculture department official. In addition, as per the claims of the officials, area-wise local officials are also visiting the fields on regular intervals. Farmers are encouraged to use wheat stem leftovers as manure and fodder.

The delay in disbursal of subsidy amount has apparently also forced farmers to resort to the stubble burning practice.

“I cannot afford to buy costly machines of straw management, hence, I asked the farmers in cooperative societies to lend their machines but they are charging Rs 1,200-Rs 2,000 per hour for the usage of the same. Hence, without any government aid how would I manage to destroy the crop residue,” said, Rana, a farmer.