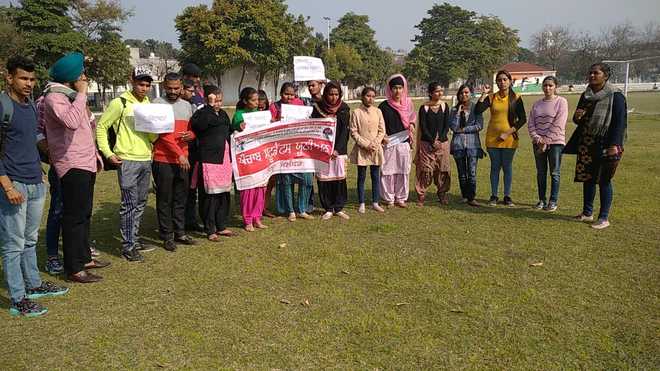 Members of the Punjab Students’ Union protest stating that the shutting of colleges would badly affect their studies.

The Punjab Students’ Union (PSU) on Saturday strongly condemned the decision taken by the state government to close colleges and universities till March 31 and demanded reopening of educational institutions. The students, while holding a protest, stated that the shutting of colleges would badly affect their studies.

District president Varjit Kaur and district secretary of the union Ramandeep Kaur stated that the students oppose the decision taken by the government to discontinue the offline education.

“The students have been taking necessary precautions. We have already suffered a lot during the last year’s lockdown as online classes completely failed to finish the syllabus. While there was no clarity on the schedule of the digital classes, there were many students who didn’t even have smartphones or internet packs to attend the classes. Moreover, almost all the institutions, including multiplexes and transport services have been opened, but institutes of higher education have been kept closed. The government is creating an atmosphere of fear in the state by closing down educational institutions in the wake of the pandemic. It is affecting studies of students and their placements. It is being used as a means to keep students away from political activities,” alleged protesting students.

Varjit added that if political rallies and meetings could be organised amid Covid, then why there is ban on educational institutes. The government should allow opening of colleges for at least limited hours and students should be called in a phased manner.

“Online education cannot be a substitute for education received in classes as it is very important for students to have access to classes, libraries, playgrounds and labs for the overall development. However, instead of chalking out a plan on how to reopen the institutions, the government is running away from its responsibilities and boosting online education,” added Ramandeep.