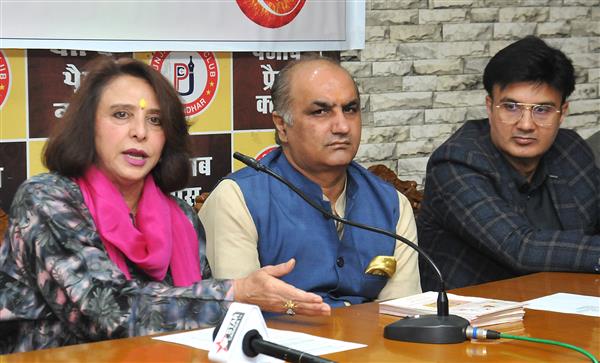 Harivallabh Mahasabha president Purnima Beri and other members during a press conference in Jalandhar. tribune Photo

The 147th Shree Baba Harivallabh Sangeet Sammelan will be held at Devi Talab Mandir in Jalandhar from December 23 to 25.

With the Covid pandemic playing spoilsport for the oldest Hindustani classical music event for the past two years, this year’s musical extravaganza has a host of musical luminaries lined up.

Members of the Harivallabh Sangeet Mahasabha, while addressing mediapersons today, said the festival would hope for an increase in contribution from the state government this year. After the Covid-protocol mandated gatherings of the past few years, the Harivallabh pandal space is expected to breathe free this year, in a much needed solace for music-starved audiences for Jalandhar.

Of the masterful line up India’s top music aces to play at Harivallabh, 11 have been sponsored by the North Zone Cultural Centre, Patiala this year. The annual music competition preceding the Harivallabh Sammelan will be held from December 19 to 22.

Harivallabh Mahasabha president Purnima Beri said: “We are expecting a sprawling pandal and a sterling line up yet again this time after the gloom of Covid years. Due to the quality artists on the list, it can be expected that main artists’ performances will begin right after the Saraswati Vandana.

The work on the establishment of the Harivallabh Bhawan is also still pending. After it is completed, we

will also be able to host big gatherings there.”

General secretary Deepak bali said, “The festival will be organised in association with the NZCC, which will sponsor 11 artistes. Contributions from the government are also expected to increase this year. The craft mela will be an added attraction for music lovers.”