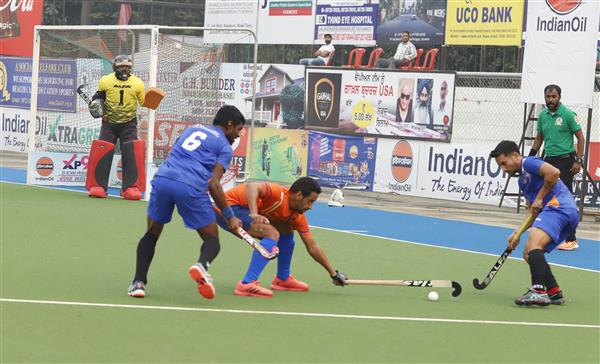 Indian Railways and Indian Oil players in action during the 39th Surjit Hockey Tournament in Jalandhar on Tuesday. Malkiat Singh

The Indian Railways beat eleven-time finalist and former champion Indian Oil Mumbai by 2-1 to earn three points in Pool A of the 39th edition of the Indian Oil Surjit Hockey Tournament, in progress here at local Surjit Hockey Stadium, Burlton Park. In the second match, the Punjab National Bank beat ASC Jalandhar by 5-3 to register a second victory in the league stage.

In the pool-A league match, the Indian Railways beat star-studded Indian Oil Mumbai with the help of a last-minute goal by 2-1. The Indian Oil took lead with a penalty corner conversion in the 36th minute of the play by Gurjinder Singh (1-0). In the 58th minute of play, the Railways equalised when Arjun Sharma scored the field goal (1-1). In the last minute, the Railways’ Sheshe Gowda scored the winning goal (2-1). In Pool A, the Indian Oil and Indian Railways have 6 points each, and both are in the race of the semi-finals. In this pool, the Indian Air Force has three points, and they have to play their last league match against the Punjab Police. After that match, semi-finalists from this pool will be decided.

In the 20th minute, the ASC equalised with the help of a field goal by Gautam Kumar (2-2). In the 26th minute, Bhagat Singh Dhillon, and in 28th minute, Deepak, scored a goal for the Punjab National Bank team (4-2).

In the 50th minute of the play, Bank’s Deepak netted the ball (5-2). In the 56th minute, ASC’s David Dung scored another goal, making it 3-5. With this win, the Punjab National Bank bagged six points from three outings. The other team in this pool, ArmyXI, also have six points from three outings. The match between Punjab and Sind Bank and ASC will decide the semi-finalists of this pool.