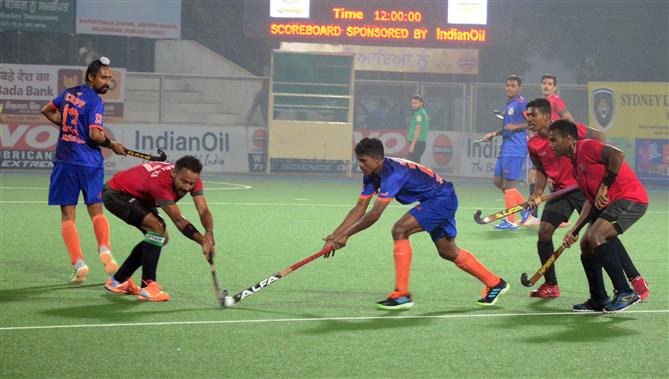 Players in action during the tournament. Photos: Sarabjit Singh

Army Green beat CRPF Delhi by 3-1 in the inaugural match at the Surjit Hockey Stadium today.

In other matches, the Indian Navy beat Corp of Signals (Jalandhar) by 4-3, ASC beat Rail Coach Factory (Kapurthala) by 2-1, and CAG (Delhi) beat EME (Jalandhar) by 3-0.

In the inaugural match, CRPF Delhi and Army Green played well. In the 17th minute of the match, CRPF’s Sharnjit Singh netted the ball from the right flank (1-0). At half-time, the CRPF was leading by a goal. In the 48th minute, Simrandeep Singh of Army Green delivered an equaliser via the penalty corner conversion (1-1). In the last quarter of the match, Army Green scored two field goals to win the match. They entered the next round of the tournament. It was Jobanpreet Singh who scored in 57th and 59th minutes of the game (3-1).

Earlier, in the first match of another knock-out stage, the Indian Navy (Mumbai) beat Corp of Signals (Jalandhar) by 4-3. For the winning team, Palangappa, Kuldeep, Ajinke Yadav and Parshant scored one goal each, whereas, for the Signals, Akshey Dubey scored twice and Rajneesh Kumar scored one goal.

In the third match of the knock-out stage, CAG (Delhi) beat EME (Jalandhar) by 3-0. For CAG, Mreshwaran, Anul Haque and Venktesh Telgu scored the goals.