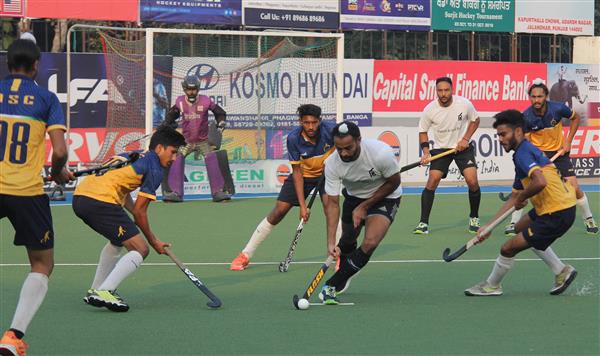 Punjab & Sind Bank and ASC Jalandhar players in action during the tournament in Jalandhar on Wednesday. Photo: Malkiat Singh

The Indian Oil-Mumbai will clash swords with Punjab National Bank-Delhi while Punjab & Sind Bank will take on the Indian Railways in the semi-finals of the 39th Indian Oil Servo Surjit Hockey tournament here on November 3.

On the last day of the league round, Punjab and Sind Bank defeated ASC-Jalandhar by a margin of 7-1 in Pool B and entered the semi-finals and in the Pool A, the Indian Air Force defeated the Punjab Police by 5-2.

In the last league match of Pool-B between Punjab & Sind Bank and ASC Jalandhar, the Punjab & Sind bank dominated the game right from the beginning. In the first minute, Jarmanjeet Singh scored (1-0). After that, Jaskaran Singh scored in the 15th, 25th and 27th minutes (4-0). In the 29th minute, Harmanjit Singh scored from the right flank (5-0). In the third quarter, Asc’s Manmeet Singh reduced the margin (1-5). In the 52nd minute, Jaskaran Singh of the Bank converted the penalty stroke (6-1). In the 56th minute, Arshdeep Singh completed the tally (7-1).