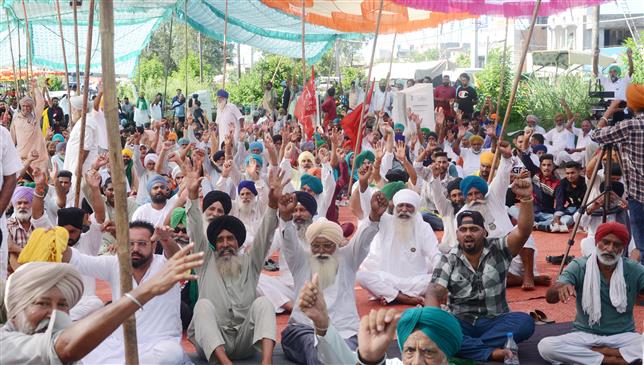 Farmers protest on the Jalandhar-Ludhiana National Highway in front of a mill in Phagwara. Photo: Sarabjit Singh

Debt mounting, left with no money

The mill owes farmers a lot — some Rs 25 lakh, others Rs 10 lakh, several Rs 2 lakh… 3,200 farmers are associated with the mill. Debt is mounting and there is no money. How are we going to survive? —Ranjit Singh, Kapurthala farmer

More cots will be laid here (on the highway); even pakka houses will be made. We will create a Delhi stir-like situation here. The government must pay our Rs 72 crore. We will lift the dharna.—Harit Singh, Hoshiarpur farmer

A long row of tractors line the road to the protest site, right in front of the Golden Sandhar Sugar Mill in Jalandhar. Harjit Singh from Pajora village in Hoshiarpur squats by Gurpreet Singh from Nadala, both have one grouse — their money has been stuck with the mill for the past three years. Farmers do understand that the blockade has hassled commuters, but they say it was the last resort left in the wake of unfulfilled assurances and prolonged wait for the payment. From Rs 5 lakh to Rs 28 lakh — farmers rue the holding up of their money by the sugar mill.

Ranjit Singh, a farmer from Khera village in Kapurthala, says: “The mill owes farmers a lot — some Rs 25 lakh, others Rs 10 lakh, several Rs 2 lakh…. 3,200 farmers are associated with the mill. It owes me Rs 5.5 lakh. We are finding it difficult to manage. We can’t take students off school and can’t buy anything. Debt is mounting and there is no money. How are we going to survive?

“Sarkar time tapaundi si (the government kept delaying). It first held a meeting with us in May. Odon kehndi si zimni chon Sangrur vali muk gai fer hal karange (Then it said let the Sangrur byelections be over, then we will find a solution). We planned a dharna in July, it again bought time. We had been promised clearance of Rs 24 crore from the DC by August 3. That too didn’t come and the government stayed indifferent. It is after waiting so long that we have finally held this dharna. Tractors from four Doaba districts have come. More are on the way.”

“I have sugarcane on 8 acres. There are some who have dues worth Rs 28 lakh pending. Three years’ payment along with interest, see where it goes. Labour has to be paid. Banks place limits on our heads. We are already struggling on the MSP, etc.”

Harit Singh, from Pajora village in Hoshiarpur, a member of the Kisan Union Doaba, who lies on a cot in the middle of the highway, says: “Halle manje ta zyada dathne hai. Pakke makaan painge. Delhi varga mahaul ho sakda. De den 72 crore. Asi uth jana (More cots will be laid here, pakka houses will be laid. Like the protests in Delhi. Let them pay our Rs 72 crore. We will get up.)”

Harhit adds: “We have so many expenditures — labour, sprays, manure and fertilisers. Thousands have been affected. How will they run homes? We have given the government four days. But they did not listen.” Farmer leaders say the Phagwara dharna will not be impacted by the government’s declaration of releasing 100 crores for farmers as the Golden Sandhar Mill was a private mill and their Rs 72 crore still remained pending.