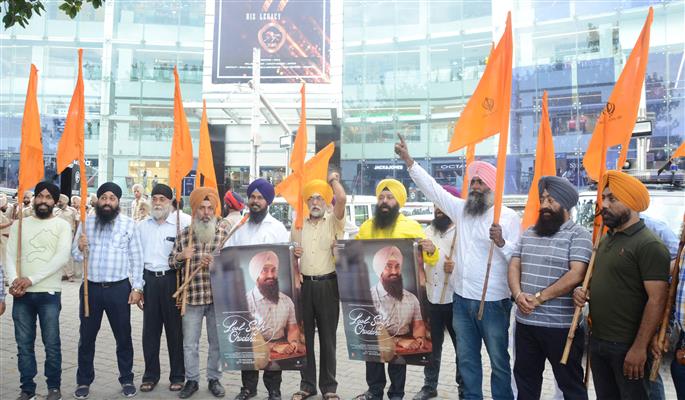 Tension prevailed outside MBD mall near BMC Chowk on Thursday morning after Shiv Sena activists staged a protest there and demanded a statewide ban on Aamir Khan-starrer “Laal Singh Chaddha”.

Aamir Khan is against the Hindu religion. He has always made fun of Hindu deities in his past films especially in his film ‘PK’. A Shiv Sena leader

There is nothing objectionable in the movie and boycotting or demanding a ban over a movie that was released eight years ago is unjustified. Harpal Chaddha, Sikh Talmel Committee

The Sena activists claimed that the Bollywood actor had allegedly insulted Hindu gods and goddesses in his last movie “PK”, therefore, they wouldn’t allow any multiplex operator in the city to run his movie.

They also removed the posters of the movie, which were placed inside and outside the mall premises. “Aamir Khan is against the Hindu religion. He has always made fun of Hindu deities in his past films especially in ‘PK’,” alleged one of the Sena leaders, while making an appeal to Punjab CM Bhagwant Mann to ban the film in Punjab.

However, the situation became tense when the activists of the Sikh Talmel Committee also reached the mall and countered the Shiv Sena leaders, saying they won’t tolerate such “hooliganism”. They said there was nothing objectionable in the movie and boycotting or demanding its ban over a movie that was released some eight years ago was “unjustified”.

Harpal Chaddha of the Sikh Talmel Committee said, “The Sena leaders in their address openly challenged us that they won’t let any show of the movie run in the theatres after 3 pm. Therefore, we accepted their challenge and reached the spot immediately. We held a protest there against the Sena leaders till 3.30 pm and ensured that no organisation or leaders created any nuisance over its screening.”

He said the way Aamir Khan had presented himself in “Laal Singh Chaddha” was appreciable. Besides, the film didn’t harm any religious sentiments. Rather it is a beautiful story of a simple man and how he sails through life with his goodwill and values, he added.

“We strongly condemn this move of the Shiv Sena leaders, who without knowing the subject of the movie have opened a revolt against Aamir Khan, that too, for a movie, which till date is all over the Internet and had appeared on movie channels a number of times,” he added.