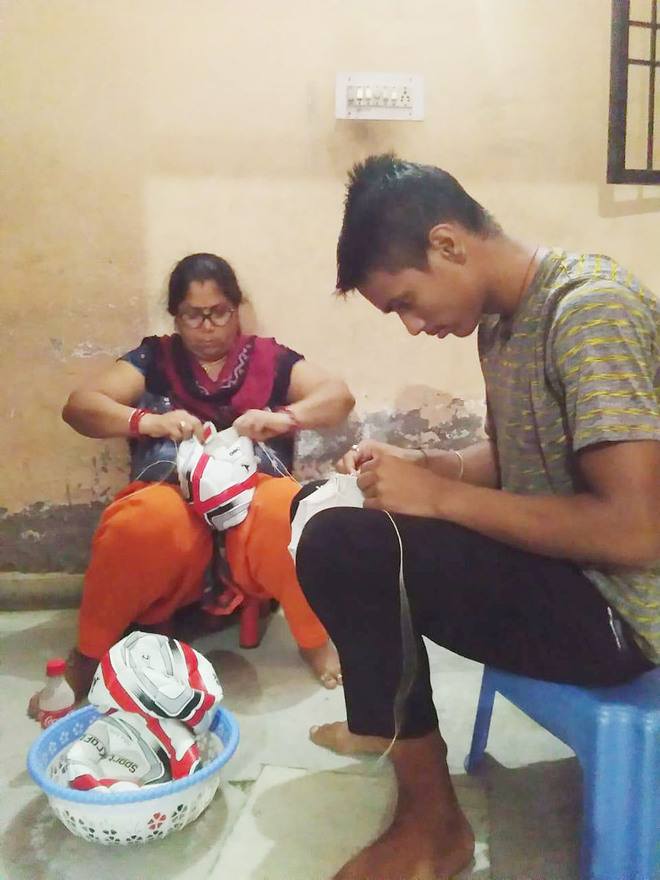 Ashish Kumar helps his mother in stitching footballs at his residence in Jalandhar.

A state-level medallist in open athletics championship is stitching footballs these days to extend a helping help to his family.

Sixteen-year-old Ashish Kumar is a talented athlete, who apart from studying, is practising hard to perform well in sports. Not only this, he is stitching footballs so that he can help his father and mother in running the house.

Ashish Kumar’s father is a factory worker, who goes to work for three days a week because of the pandemic and Ashish’s mother also works in the same factory. When she gets back home, she stitches footballs and Ashish joins her.

This young and talented athlete said he started stitching footballs to remove the burden and pressure off his parents’ minds.

“I love playing and want to become a great athlete, but at the same time, I know my responsibilities as well. Being their elder son, I have to work and earn for my family too,” he said.

Sunil Kamboj, Ashish’s coach, is all praise for him.

“He is a dedicated player. There are problems in the family but still, Ashish never lets any problem come his way. Players always need a good diet, but such players, who belong to economically weak families, always suffer and hardly get a proper diet. But I make sure I help them in whichever way possible,” the coach said.

Ashish’s mother Prem Shila Devi said she was thankful to the people around her, as they helped her family a lot amid the pandemic. “Ashish’s coach, and our factory owner, make sure we are never without ration. Sunil sir is like a blessing for us. Not once did I face any ration problem in our home,” the mother said, adding that she wanted her son to rise in life and would do anything for him.

“Even when Ashish was small, he would help me in stitching footballs. But then, I never allowed him, because I didn’t want him to work, but now, he doesn’t stop and tries to reduce my burden,” Shila said.

Recently, Ashish’s father had also purchased a second hand phone from one of his friends for his online studies. Ashish said the seller had asked his father to pay money in instalments. “We have got it for Rs3,500. But now, at least I will be able to study properly,” Kumar said.