This Sushant Rajput is winning hearts with his creativity

16-year-old and Class XI student, this effigy maker has started getting orders ahead of Dasehra 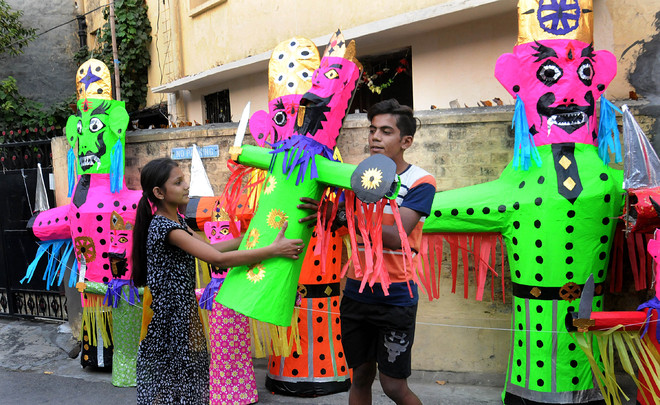 Young craftsman Sushant Rajput with his Ravana effigies, which he has displayed for sale at Central Town in Jalandhar. Tribune Photo: Malkiat Singh

The country might have lost its heartthrob Sushant Singh Rajput, but Jalandhar city can still boast of its own 16-year-old Sushant Rajput who is bagging accolades for his creativity ahead of Dasehra.

One can’t help but admire the work of Rajput. Having remained engaged in making and selling kites, working models of science and charts, this Class XI student of Junior Model School, Ladowali Road, is busy making short effigies of Ravana these days. He has come up with colourful effigies in two sizes – approximately 6 feet and 4 feet tall, he is selling these outside his residence at the Central Town here.

The teenager explains why he feels his effigies will sell good, “The state government is yet to decide on whether to allow Ram Leelas and Dasehra melas. Also, most people would avoid visiting melas and would only go for small-level celebrations. I expect the mohalla leaders to buy small effigies from me for holding mohalla-wise celebrations of Dasehra.”

The boy, who has already started displaying these effigies outside his residence, says that he has already begun getting orders and inquiries from the passers-by.

Sushant’s father Gulzari Lal, who deals in jute sacks, says, “My son started experimenting with the craft items since his childhood. He has been selling handicrafts for the past four years and is already bringing in good income. His 6-feet effigy is getting sold for Rs 2,500 and the smaller one for Rs 1,200. He is doing everything on his own except that I get him bamboos required and cut them into the size that he needs.”

His mother Malti recalls, “My elder son Kushant was also creative like him but we lost him a few years back.” She is all praise for Sushant too, “He works so hard and spends two days carefully cutting coloured papers and pasting them together over the framework of bamboo and under-layers of newspapers to give a proper shape to each effigy. He learnt it all by himself as no one in our family was into this business earlier. He is so passionate that he sometimes stays awake the whole night to complete the task that he began.”