Were on way back home after visiting Vaishno Devi shrine 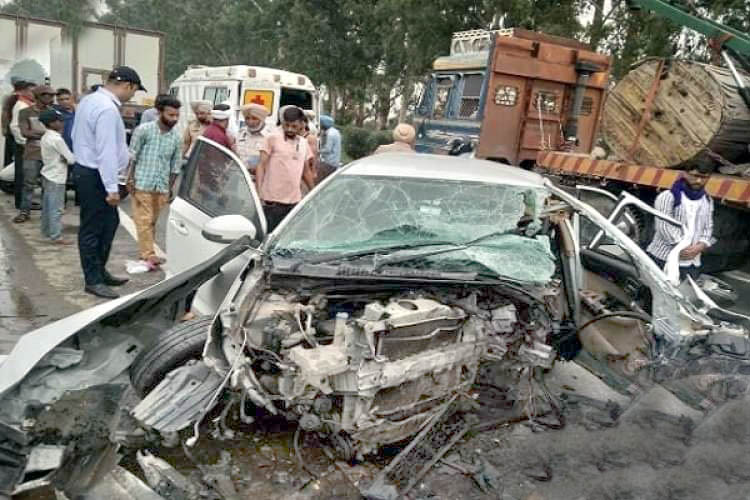 The mangled remains of the car that met with an accident near Tanda on Monday. Tribune photo

In a tragic incident, three members of a family — two women and a child — were killed and one another was critically injured when the car in which they were travelling rammed into a parapet of a culvert on the Jalandhar-Pathankot highway near Tanda industrial focal point in the wee hours of Monday.

As per information, the family was returning to their home in Jalandhar after paying obeisance at the Vaishno Devi shrine. When they were about to take the Jalandhar-Pathankot flyover near Tanda, Hoshiarpur, Kanwar Aggarwal (31), who was driving the car, reportedly dozed off and the vehicle hit a culvert.

It is learnt that when the car hit a culvert, there was an explosion, following which, nearby people ran towards the spot and got everyone out of the car. The family was rushed to the Civil Hospital, Tanda, where the doctors declared Kanwar’s wife Mehak (28), mother Renu (53) and his two-year-old daughter Varinda dead, while he was referred to a private hospital in Jalandhar for the treatment as his health was said to be critical.

Tanda Deputy Superintendent of Police Raj Kumar said a case under Section 174 of the CrPC has been registered at the Tanda police station in Hoshiarpur.

The bodies have been kept in the mortuary of the Civil Hospital for postmortem examination.