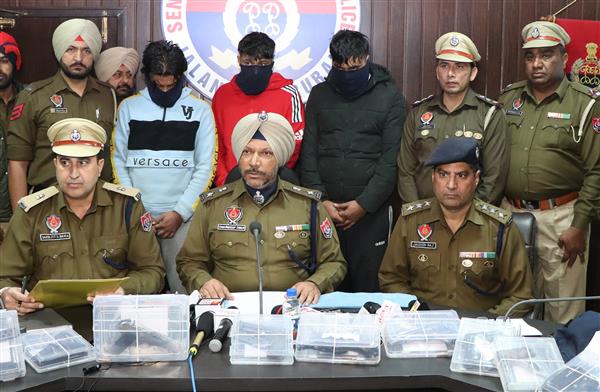 The Jalandhar Rural police today claimed to have arrested three members of the Lakhvir Landa’s gang and recovered nine weapons, ammunition and an i20 car from their possession.

The suspects have been identified as Lovepreet Singh, alias Laddi, of Garhshankar, Gagandeep Singh, alias Gagan, of Mohalla of Bilga and Sukhwinder Singh of Goraya.

The SSP said they were in contact with gangster Ravi Balachauria of Hoshiarpur, who is lodged in the Amritsar jail. Balachauria is reportedly in contact over phone with another gangster Rajvir Kaushal lodged in the Patiala jail and had been giving directions to the accused to procure weapons from UP, use them in extortion cases and attempt murders of rival gangsters.

Lovepreet already had five cases against him, including murder and attempt to murder. There are four cases registered against Gagandeep.