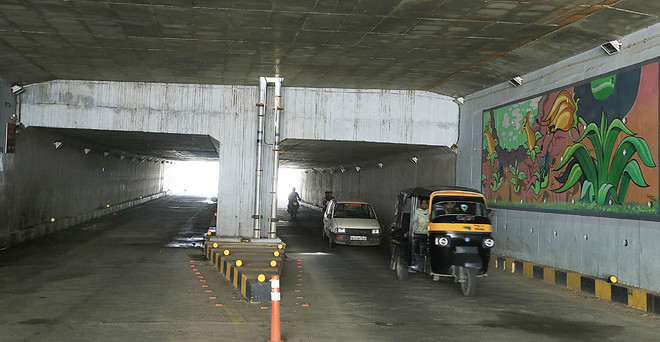 While the railway underbridge came as a blessing for 50 colonies, it did not resolve issues of the Shiv Nagar residents. Tribune file

Shiv Nagar Area residents, who had been a harried lot for the past five years, due to long traffic jams in the area finally got a breather. Vicky Kalia, councillor of Ward No. 64, who had taken up the matter with the authorities, said finally, the issue that had been troubling the residents for so long will be resolved now as land for a new road leading towards the towards Industrial area has been acquired. This will bifurcate the traffic.

Notably, residents of Shiv Nagar had been filing complaints with the Municipal Corporation (MC) since the Chandan Nagar railway underbridge (RUB) got constructed. Until now, there was only one way for the traffic coming in from and going towards the railway underbridge, i.e., from Shiv Nagar streets, which had been causing a great inconvenience to people living in the area. Commuters would often indulge in fight with each other when cars, scooters and auto rickshaws used to get stuck in the narrow streets while crossing.

Even the residents used to find it difficult to have a sound sleep whenever heavy rush of vehicles would pass through the area.

RUB boon for others, bane for Shiv Nagar area residents

Having been proposed by the Municipal Corporation (MC) since August 2010 and remaining mired in various controversies pertaining to land acquisition for nearly five and a half years, the much-awaited Chandan Nagar railway underbridge (RUB) was finally opened in 2016.

Residents of nearly 50 colonies, including Sodal Area, Industrial Area, Preet Nagar, Dada Colony, Globe Colony and Shiv Nagar, which falls on the other side of the Sodal railway crossing, were benefited with the opening of the bridge, as their earlier passage used to get blocked for more than 120 times a day owing to frequent passage of trains between Jalandhar and Amritsar. Students of Shiv Joti Public School, Seth Hukum Chand School and SD School, which fall on either side of the track, were also much affected. Several accidents had also taken place at the crossing in the recent past, especially around Sodal Mela during which there is much rush across the crossing site.

This is how the need of the RUB was felt, but, while it came as a blessing for others, Shiv Nagar area residents remained in problem, but, now with the new path, this problem will also get resolved. Vicky Kalia, the councillor of the area said the traffic will now be made one way on both the roads, so, that no problem arises in future.