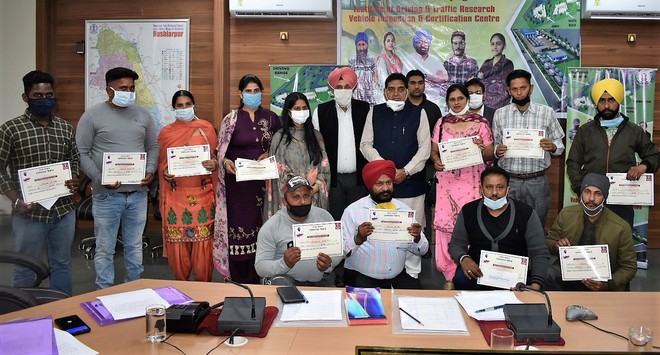 Twentyseven-year-old Dinesh Kumar of Sahri village was extremely happy to get a mini-bus permit allotted by the Punjab Government on Wednesday. He said he was facing hardships due to unemployment but now, he could easily earn bread and butter for his family by running a bus from Dada Mara village to Hoshiarpur, covering nearly 10 villages.

After receiving the mini-bus permit from Industries and Commerce Minister Sunder Sham Arora, under Ghar Ghar Rozgar and Karobar Mission, Dinesh said he got this permit on merit basis in a complete transparent manner, adding that the permit was for running bus service in those villages, where there was no bus service available earlier. He said he would ensure quality and safe travel for residents of villages on this particular route.

A woman beneficiary Manpreet Kaur of Patti village in Chabbewal constituency expressed gratitude towards the Punjab Government for providing the permit saying it would certainly strengthen her family financially. She said her joy knew no bounds, when they had come to know about the permit from Hoshiarpur to Bahowal.

Earlier, while handing over bus permits to 11 beneficiaries at the District Administrative Complex here, the Industries and Commerce Minister said this landmark initiative of the state government under CM Capt Amarinder Singh would create job opportunities for the unemployed youth on a large scale. The bus permits to rural youth would also ensure safe, secure and easy transport services for the rural population not only in the district, but across the state, said Arora, adding that Punjab Government was handing over as many as 262 permits in the district to eligible beneficiaries in the first phase, which would cover almost every part of the district.

He said this project, to be implemented at a cost of Rs15.5 crore, would be a milestone in the transport sector. The location tracking device would be installed in all public sector buses by March 31 and all private buses would be covered by the end of August.

Now, get dl, RC delivered at your home

Jalandhar: With a symbolic release of five mini-bus permits to unemployed youths, MLA Sushil Rinku and Deputy Commissioner Ghanshyam Thori kick-started the distribution of 190 mini-bus permits to youths in a virtual launch event chaired by Chief Minister Capt Amarinder Singh on Wednesday. MLA Sushil Rinku and the DC said 190 applicants from Jalandhar were selected for the permits, adding that grant letters to five youths of Jalandhar district were issued during today’s event. They said home delivery of driving licenses (DLs) and vehicle registration certificates (RCs) through postal system has also been launched by the CM, which would help more than 20,000 applicants across the district to receive their DLs and RCs at their home. He said 10,000 applicants of driving licence and equal number of applicants of vehicle registration certificates would receive their documents from the Transport Department at their home and now they need not visit any government office to collect these. Dakoha resident Kamna said she applied for the permit and got a grant letter for Musapur to Jalandhar city bus strand route. She said it was like a dream coming true as she would be able to run her own small business enterprise. Another beneficiary Jarnial Singh of Mohyal Nagar said he had never thought of getting a bus permit on his name. TNS

Permits given to 70 youth in K’thala

Kapurthala: As many as 70 youth across the district got mini-bus permits under the door-to-door Employment and Business Mission. During the main function held at the District Administrative Complex, Zila Parishad chairman Kamlesh Rani, ADC Rahul Chaba and others participated in the online inauguration of projects for Kapurthala by CM Capt Amarinder Singh. Apart from the administrative complex, people participated in the online programme from 63 places in the district, including 13 in urban areas and 50 in rural areas, where newly elected councillors of Kapurthala MC were also present. Rahul Chaba said the government was making all out efforts to provide employment opportunities to the youth. Kulwant Singh from Bhandal Bet village, who got the permit, said it came to him without any political recommendation and bribery, for which he was thankful to the government. Amarjit Singh Saidowal block Congress president, YC president Sourav Khullar, SDM Kapurthala Virender Pal Singh Bajwa, SDM Bhulath Balbir Raj, DDPO Lakhwinder Singh Randhawa were also present. TNS