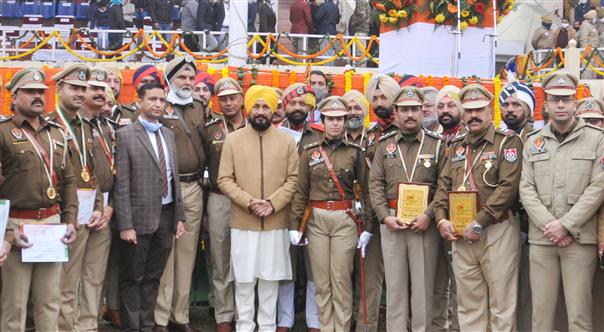 Recalling the exceptional contribution made by Dr BR Ambedkar in drafting the Constitution of the nation, Chief Minister Charanjit Singh Channi on Wednesday unfurled the Tricolour at Guru Gobind Singh Stadium here.

He said it was a humongous task to frame the Constitution for a country as diverse as ours, but Baba Saheb made strenuous efforts and accomplished the gigantic work with aplomb. It took two years, 11 months and 18 days to draft the Constitution, which was handed over to the President of the Constituent Assembly, Dr Rajendra Prasad, on November 26, 1949, thus paving the way for country becoming a republic on January 26, 1950.

Exhorting the people to leave no stone unturned in ensuring unhindered developmental journey of the country, the CM assured that the communal harmony and peace in the state would be maintained at all costs. The march past was led by Jasroop Kaur Baath, IPS, and DSP Satbir Singh, comprising the contingents from the Indo-Tibetan Border Police (ITBP), Commissionerate Police (men and women), PRTC Jahan Khelan (three contingents) and Home Guard Wing of the Commissionerate Police.

The Chief Minister also honoured 135 persons from different walks of life rendering selfless services to society with the appreciation certificates besides honouring the members of march past contingents with the mementoes. The list of awardees included two students – PM Bal Puraskar awardee Meedhansh Gupta for his social work and Bhavya, a budding artist. Bhavya has made several sketches of real-life heroes, religious gurus, saints and senior police officials. Noted plant lover Parduman Thukral, who has been maintaining several parks in the city and has organised various plantation drives, was also honoured.

Assistant Commissioner of Police (Headquarters) Subhash Chander Arora, too, was among the awardees for rendering his services, especially during the Covid-19 period through various outreach programmes carried out by the police during the trying times.