As Bhagwant Singh Mann took oath as the Chief Minister of Punjab, Tribune lensmen Pradeep Tewari and Sarabjit Singh captured the mega ceremony at Khatkar Kalan, which was covered in the yellow hues of ‘basant’ — the colour of revolution 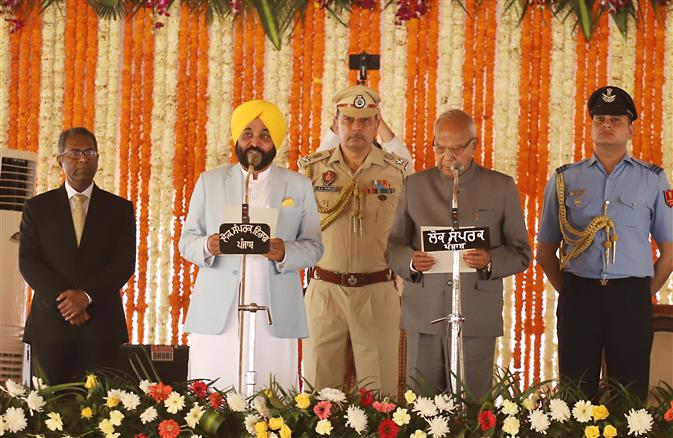 YELLOW was the colour of the day at Khatkar Kalan, the ancestral village of great freedom fighter and youth icon Shaheed Bhagat Singh, where Aam Aadmi Party's Bhagwant Singh Mann took oath as the Chief Minister of Punjab.

YELLOW was the colour of the day at Khatkar Kalan, the ancestral village of great freedom fighter and youth icon Shaheed Bhagat Singh, where Aam Aadmi Party’s Bhagwant Singh Mann took oath as the Chief Minister of Punjab.

While men came supporting yellow turbans, women, too, came wearing yellow dupattas to add to that happiness quotient. After all, their leader, whom they had elected, hoping to bring about a change in the state dynamics, was about to take the oath.

Yellow signifies optimism, spring and happiness and ‘happiness’ was no doubt writ large all over. A serene, yet revolutionary spirit prevailed at the main pandal. A 100-feet-long stage was erected for the event.

Besides, AAP flags and banners were lined up everywhere on the road, from the highway to the venue, as youth came in large numbers sitting atop buses and tractor-trailers.

Youngsters fond of clicking selfies made a beeline near a semi-constructed Bhagat Singh Centenary Foundation office just next to the main memorial site that had statues of freedom fighters — Bhagat Singh, Rajguru and Sukhdev — on the rooftop, to get that perfect shot.

Such was the spirit, that boys, charged with enthusiasm and patriotic fervour, were seen helping each other in tying yellow turbans in Bhagat Singh style at the venue and raising slogans of Inquilab Zindabad and Jo Bole So Nihaal, Sat Sri Akal.

Clad in a white kurta pyjama, sky blue jacket and a yellow turban, Bhagwant Mann, after taking the oath, addressed the huge gathering saying that this is for the first time that any Chief Minister was taking oath from the land of martyrs as earlier swearing-in ceremonies were held from stadiums and palaces.

A strong presence of AAP’s Delhi team, including CM Arvind Kejriwal, Deputy CM Manish Sisodia and others, was visible as a separate stage was set up for them.

“Traditional parties are losing their ideology in the country and its support base is eroding. The new government will be an endorsement of Kejriwal’s vision, who believes that politics is much above caste, creed or religion,” said an AAP supporter, who came all the way from Pathankot to attend the ceremony.

“This is a big day for us, as it marks a political transition for the state. The victory has been made possible because of majority of the people of Punjab who voted for change,” an AAP activist said.

Yellow signifies optimism, spring and happiness and ‘happiness’ was no doubt writ large all over the faces of those who came to witness the ceremony at Bhagat Sing’s ancestral village. Such was the enthusiasm among boys that they were seen helping each other in tying yellow turbans in Bhagat Singh style 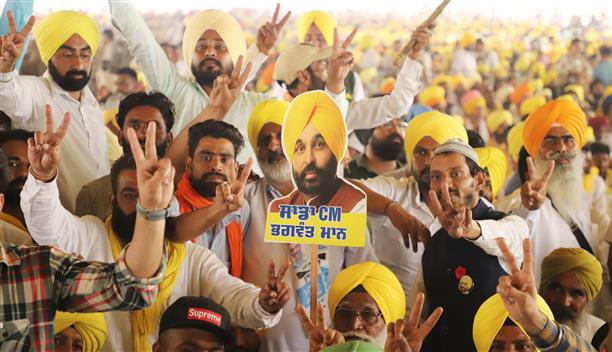 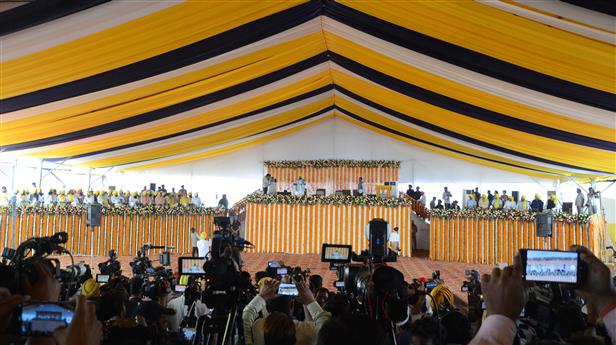