These have fared far better in getting regular clients than city-based restaurants, hotels 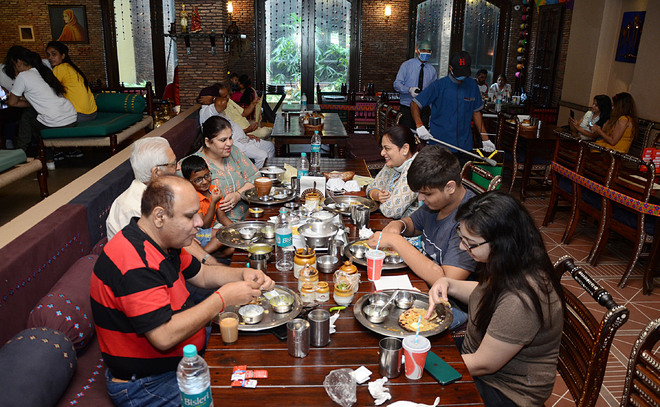 When almost all city-based restaurants and hotels have lost out on their customers and some of them have even shut down operations temporarily amid coronavirus, the highway eateries have fared far better getting a regular clientele.

Confined at home, they needed some change

Among various highway travellers at Haveli, a Jalandhar-based family of seven, too, could be spotted enjoying food at Haveli. Raj Kumar Sikka had come along with his wife, siblings, kids and family elders. Asked how come he had tagged the elderly and the kids, he quickly retorted: “They had been getting bored confined to the four walls since March and were after me to give them some change. So, I brought them here to spend a good time together outside their confines.”

Ever since the MHA issued guidelines on June 23, the highway joints were the first to open, of course keeping safety protocols in mind. Though the usual buzz is missing and waiting time to occupy a table is minimal, almost all the eateries including Haveli, Lucky Dhaba, multinational chains of eateries offering burgers, pizzas, coffee and snacks are getting a reasonable footfall.

The more one advertises about ensuring safety norms and government SOPs, the more clientele he gets as is the case with Haveli. Step into their outer area and you no longer find women and kids filling the buckets from a well and posing for pictures — a scene that has been the main attraction of the restaurant for 13 years since its launch. The rides for kids are no longer functional. In fact, there are very few kids and elderly peoplewho are landing up here. Even those who come along are not allowed to venture around and touch anything here and there.

The outside stalls of junk food opened just a month back but the menu remains limited. Golgappas are served but in one pack where in the customer has to himself fill the balls with a glass full of sweet and sour water provided along. South Indian counter provides dosas but not the idlis and vadas. The Chinese counter too has a limited number of items to offer.

Even the main menu in the restaurant remains a bit restricted. While earlier even the non-seasonal varieties of vegetables were available on the platter, but now only the more commonly ordered food items are being offered. Other than ensuring a good quality of food and service, the main focus remains on maintaining hygiene and sanitisation for which a dedicated staff remains employed all the time.

While thermal screening, hand sanitisation and 50 per cent occupancy norms are being followed like any other restaurant, Haveli has introduced new layout system. As every alternate table in the restaurant remains sealed, new side tables have been added to the main tables. It is here that the waiters place the autoclaved, laminated plates.

Harsh, manager of Haveli, shares: “We have installed a plant where all washed dishes are subjected to heat and then laminated. We laminate all utensils including plates, bowls, glasses, cutlery and even pickle and chilly stands. We keep on fumigating the restaurant with sanitisers all day through. Our waiters serve the customers wearing masks, head caps and gloves which we keep providing them afresh. We keep checking the body temperature of our staff after every two hours and are even maintaining a record of the same.”

Haveli CEO DK Umesh shares: “From the number plates of vehicles parked outside, we have assessed that majority of our customers are travellers. The number of people coming to us from Jalandhar, Phagwara and neighbouring towns have somewhat fallen. But it is indeed picking, especially on the weekends. We get about 250 cyclists from Jalandhar at our dhaba on Sundays, who stop over and have paranthas and tea here.”

I am a businessman from Faridabad and was on my way to Jalandhar for some work on Tuesday. So, I chose to stop over here for lunch at Haveli. I am satisfied with the level of hygiene and sanitisation that the owners are maintaining — Sudhir Verma, a customer

We started operating the day dining facilities were introduced. We worked out on plans to ensure proper sanitisation to rebuild customers’ confidence. We are yet to open our banquet and theme resort ‘Rangla Punjab’. We are waiting for norms to allow entry to over 50 people — DK Umesh, CEO Haveli

I am regular customer at Haveli. I’ve been here even during the last two months. Fewer events are held now but I venture out with my friends. We have been taking all precautions to keep us safe from Covid but going out occasionally is important to have some change.  — Sumit Kalsi, Mrs Punjab 2017

We are going out only at some selective places, where we feel confident that we won't catch an infection. Life had become quite monotonous doing cooking all the time in the kitchen and we indeed look forward to some kind of a break in between to keep ourselves pepped up. —  Dimple, housewife