When the going got tough for this bodybuilder, he got going : The Tribune India

When the going got tough for this bodybuilder, he got going

Hard work pays From being a laughing stock to an international bodybuilder, Harminder Dulowal has defied many odds 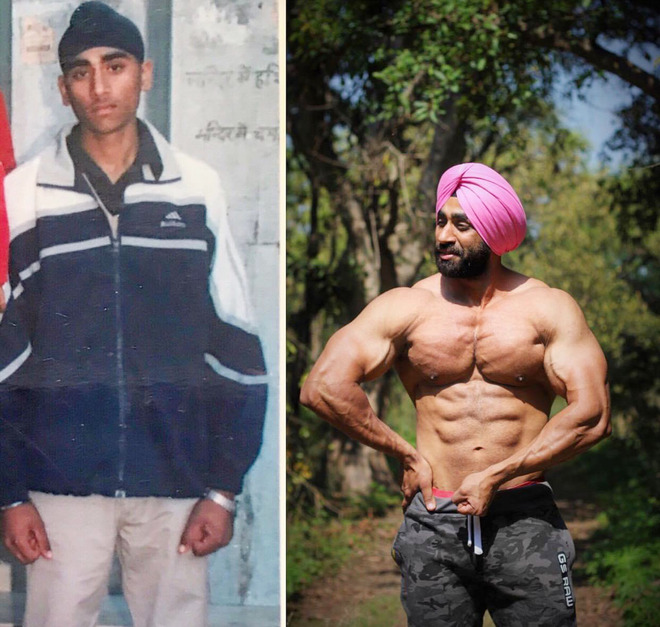 Harminder Dulowal, A bodybuilder; Before (left) after (right)

Once ridiculed and bullied for having a lean physique, Harminder Dulowal never knew that one day he will become the president of a prestigious federation of bodybuilding, Fitness International Federation (FIF). Himself a bodybuilder, apart from being a motivational speaker, bodybuilding and athletic coach, nutritionist, an international physical fitness judge, the 32-year-old, a native of Dulowal village in Kapurthala, is someone the local fitness freaks look up to.

Around 17 years ago, the teenage years of his life – when he was mocked at for being a lanky-looking guy – drew him to bodybuilding. And changed his life forever. He used to weigh only 38 Kg when he started working out, and today he weighs around 100 kg and lifts weights double than his body’s.

He says only dedication and sheer hard work helped him to reach at this spot. “From early morning training sessions to late-night diet meals, a lot of hard work and discipline is required to excel. Many times, our bodies give up, but hope and dedication keeps us going.”

He is widely popular among young fitness enthusiasts. Thousands of youth from all around the globe follow him on his social media platforms. He has trained over 200 international level, both male and female athletes and bodybuilders, and is always up for those who want to build a career in bodybuilding.

"I still remember my first medal that I bagged when I was 19. I was naive and completely unaware of the field. Some of by gym mates asked me to participate in the district-level body building competition that I ended up winning,” he shares.

Since then there was no looking back. He even compromised his studies, he failed in the first year of my bachelor''s degree at Khalsa college. “However, I continued to pursue my passion despite reluctance from my family who even bought a tractor for me to work in fields!” he quips. With the help of his achievements he again took admission and got a position in college bodybuilding team. “In 2006, I won a silver in the inter-university bodybuilding championship that eventually helped me in getting a seat at Punjabi University, Patiala, for the physical education course. Even the fee was waived off,” he tells.

He would work as a courier boy to supplement his diet expenses. “And by the time I ended my Masters and MPhil degree, I started training people and provided personal training at clients’ home,” he says.

He was second best at the All India Inter-University Championship in 2012. Somehow he came to know about the World Fitness Federation and started preparing for it. “Consequently, In 2015, I won Mr World South Africa title. After a few unsatisfying performances, I won Muscle War Singapore 2017 and Mr Asia 2018 title, by clinching a gold in the extensive bodybuilding.”

As diet plays an important role in getting buffed up, he developed knowledge of nutrition and promoted only vegetarian diet. He says natural sources of food, combined with processed supplements are enough in bodybuilding. In order to impart his fitness knowledge, he now owns a gym and his own fitness brand ''King Nutrition''. His parents, who didn''t support him in the beginning, now manage his clients and the gym.

For the budding bodybuilders, he has a message to deliver, "Nothing is impossible, hurdles starts fading when you work hard. Just remain focused and eat only that is fit for body. The youger generation thinks that supplements help to gain finer muscular body, it is nothing but a hoax. Consume ac natural diet and food products to keep yourself fit and healthy in the long run,” he signs off.

Owns a gym and fitness brand

As diet plays an important role in getting buffed up, he developed knowledge of nutrition and promoted only vegetarian diet. He says natural sources of food, combined with processed supplements are enough in bodybuilding. In order to impart his fitness knowledge, he now owns a gym and his own fitness brand ‘’King Nutrition’’. His parents, who didn’’t support him in the beginning, now manage his clients and the gym.