Where encroachments deprive pedestrians of their right to walk 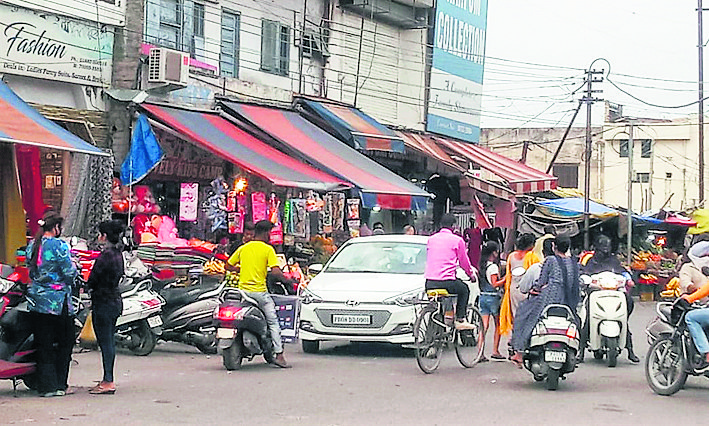 Encroachments in marketplaces have become a common sight here. Besides, vehicles parked outside shops in a zigzag manner add to the woes of commuters and pedestrians.

“There are no footpaths in most markets and wherever they are, they are mostly encroached. Teams of the municipal corporation sometimes carry out inspections, but to no effect,” says Akshay Prashar, a local resident.

The already narrow roads and bazaars are encroached upon by shopkeepers, making it difficult for commuters and pedestrians to move around. Though officials of the municipal corporation (MC) carry out inspections infrequently and seize some of their articles kept on the road, such inspections hardly act as a deterrent as the shopkeepers start placing their goods back on roads as soon as the team moves ahead. Most of the main markets like Committee Bazaar, Kashmiri Bazaar, Bassi Khwaju Bazaar, Sheesh Mahal Bazaar, Kotwali Bazaar, Vakilan Bazaar, etc, have been reduced to narrow lanes by shopkeepers. Besides, haphazardly parked vehicles also leave no space for pedestrians to walk.

Social activist Ashutosh Sharma says, “Mostly MC officials turn a blind eye to the encroachments. The display of goods on roads and in marketplaces by shopkeepers outside their shops deprives the pedestrians of their right to walk.”

The road outside Old Sabzi Mandi, near Ghanta Ghar and Kamalpur Chowk and the bus stand road are encroached by street vendors and their rehris (carts). The rehris of fruit and vegetable and the cots laid by rags vendors and others encroach on around 15-20 feet of space on both sides of the roads during the daytime. These encroachments leave very little space for two-wheelers to drive, leave alone movement of four-wheelers here.

The problem is compounded by haphazard parking of vehicles (cars and bikes). Though there are two MC and two private parking lots near these areas, commuters seldom use them and prefer to park their vehicles on the roadside, leading to accidents and frequent traffic snarls. Long queues of vehicles are witnessed many times during the day at Ghanta Ghar Chowk, Phagwara Chowk and the Gauran Gate market.

The apathetic attitude of the MC is adding to the city residents’ hardships. Even the traffic police are doing nothing in this regard. The traffic police personnel deployed at various crossings in the city and check-points only challan traffic rule violators. They hardly pay attention towards regulating traffic. Further, the dysfunctional traffic lights at some important points in the city pose a risk to commuters.

Balbir Raj Singh, Commissioner, MC, Hoshiarpur, said, “Anti-encroachment drives were being conducted before the lockdown, but due to various Covid-related duties and activities, such drives could not be conducted. But now we are going to start them again in a couple of days. The irony is that for whom we are conducting such drives they do not understand their responsibility.”