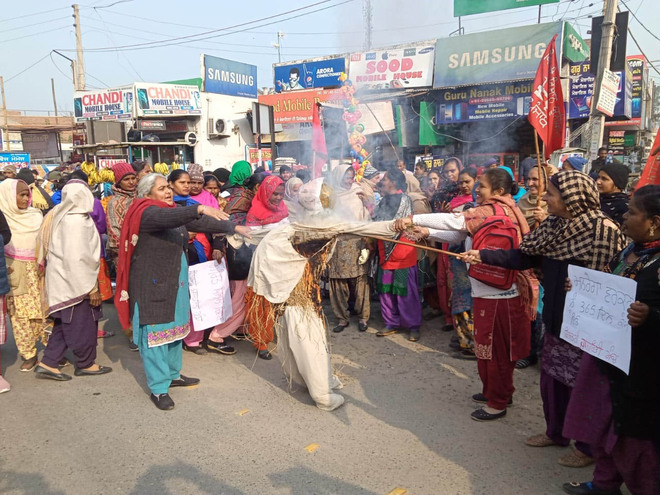 On Mahila Kisan Diwas, a morcha was held at the Jandiala Manjki bus stand on Monday by 200 to 250 women of the Bhartiya Kisan Union (Rajewal). They participated enthusiastically and raised slogans against the government. Women leaders said they would continue to hold protests against the Centre and extend solidarity to the protests unless the government repeals the laws.

The BKU (Rajewal) women members have also been heading to Singhu in buses in support of the movement. Buses have gone from Daduwal, Sarhali, Samrawan, Jandiala among other villages, from where 30 to 35 women set off for the Delhi border daily. Women who participated at the Jandiala morcha on Monday included Kuljit Kaur Jandiala, Jaswinder Kaur Jandiala, Manjti Kaur, Gurbaksh Kaur, Jasbir Kaur, Swaranjit Kaur and Hardeep Kaur Macheana among others.

On the call of the Sanyukta Kisan Morcha, the Istri Jagriti Manch and Kirti Kisan Union celebrated the Mahila Kisan Diwas and appealed to women to participate in large numbers in the tractor protest rallies heading to Delhi border on January 26. Women offered tributes to those who lost lives at the farmers’ protests and burnt an effigy of the Centre at the Mehatpur bus stand. They called on farmer-labourer women workers to head to Delhi January 23 onwards. Istri Jagriti Manch district president Anita Peter, Kirti Kisan Union leader Surjit Kaur, Baksho, Baljit kaur, Sukhmani, Kudeep Kaur, Sukhwinder Kaur and Paramjit Kaur among others were present on the occasion.