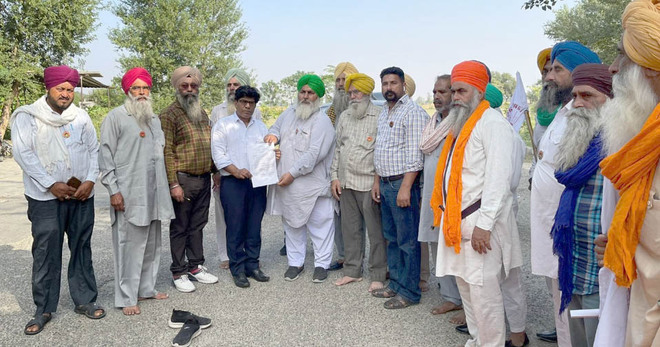 Farmers hand over a memorandum to the Shahkot SDM on Tuesday.

“Pehlan kanoon vaapsi, fir ghar vaapsi” was the response from the farmers on the occasion of completion of 11 months of the farmers’ protest. To mark the occasion, the farmers on Tuesday held a protest in various parts of the district. Keeping their morale high, they said they wouldn’t return home until the farm laws were repealed.

Apart from demanding a repeal of the contentious farm laws, they also sought compensation for the crop loss this year and legal guarantee for the MSP for all crops. In unison, the farmers demanded the arrest of Union Minister of State for Home Ajay Mishra and his dismissal from the Union Cabinet over the Lakhimpur Kheri incident. The farmer leaders warned the Centre and the Punjab Government that if their demands were not met, they would intensify their struggle.

Members of the Kisan Mazdoor Sangharsh Committee (KMSC) staged a protest at the SDM’s office in Shahkot. Salwinder Singh Janiyan, district president, and Gurmel Singh Rerwan, district general secretary, respectively, of the KMSC, Jalandhar, are protesting at the Singhu border in Delhi from October 15 to 26. As per the guidelines of the state committee, Harpreet Singh Kotli Gajran, press secretary, and Satnam Singh Raiwal, district committee member, along with several others participated in the dharna.

“We seek immediate compensation for damage caused to crops by heavy hailstorms, removal of difficulties in procurement of paddy, elimination of shortage of DAP fertilizer and its black marketing and withdrawing of fuel prices,” added Harpreet Singh.

Kunwar Sartaj Singh, district leader of the Azad Kisan Sangharh Committee, Punjab, said the protest would continue. “We have been meeting people and conducting meetings. People are registering their support in large numbers. After the paddy harvesting season, farmers would reach Delhi-Haryana borders in huge numbers and over 10,000 people are reported to be present at the Singhu and Tikri borders on completion of one year of the farmers’ protest. We won’t return until the laws are taken back.”

While submitting a memorandum to the Shahkot SDM, the farmers demanded the enactment of a law-guaranteeing procurement of 23 crops, immediate repeal of the Electricity Amendment Bill, 2020, and the Air Pollution Act, 2020.