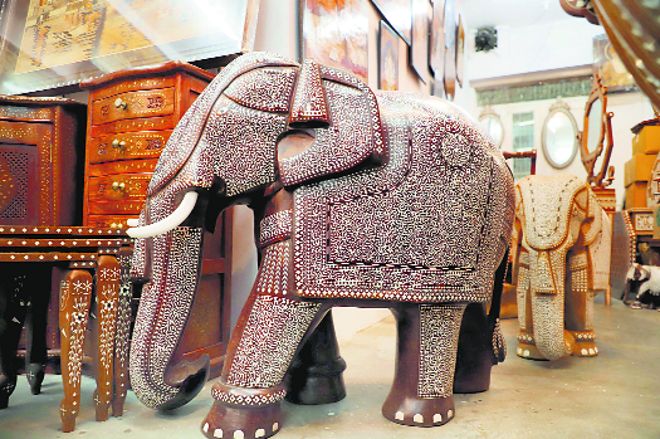 As the state government announced to set up Wood Park in Hoshiarpur, Tribune correspondent Deepkamal Kaur and lensman Sarabjit Singh take you through the ins and outs of the superlative wood inlay art being done here

Passing through a narrow alley starting from Dana Mandi Chowk of Hoshiarpur, one reaches the world-famous Dabbi Bazaar of Hoshiarpur that opens to a breathtaking display of an exquisite inlay wood art. Various designer items like inlaid tables, chairs, dressing tables, jewellery and tissue boxes, chests trolleys, sceneries, sideboards, corner stands, chessboards, trays, coasters, pen stands, key hangers and elephants used in our daily lives attract visitors to this bazaar. Any tourist sauntering around the city would prefer carrying home a precious souvenir of this kind.

Etched and pasted with tiny pieces of acrylic, this traditional artwork requires a lot of perfection, practice and fine manual labour. Machinery is an outcast, for artists rely upon tools like chisels, knives and hammers. They tell that though laser machines have been invented but these cannot be used for finer work as tiny pieces had to be cut and glued.

What is wood inlay craft?

To put it simply, inlay is a technique of engraving various small motifs into hollowed out spaces of wood to make a unique designed pattern on its surface. The motifs, which were originally made out of ivory extracted from elephant’s tusks, is now made of acrylic, plastic, bronze and even camel bone. That the task is done on sheesham or rosewood, which is a good quality timber, comes off as no surprise when one is told about the price tag; which touches the sky. The market is largely thriving on Doaba’s NRIs who usually gift such items to the newlyweds.

When and how did this work originate?

Wood inlay work started in Hoshiarpur about 300 years ago. Situated in the foothills of the great Himalayan ranges, high-quality timber was available in abundance in the region. The city also was home to the finest carpenters. To begin with, the work was done on stringed musical instruments like veena, sitar, sarangi etc made here. Eventually, the same work was started on furniture and decorative items. The items then embedded with ivory remained in high demand by the royal families of Punjab. Ivory ones were even exported in 1850 from here but its use was banned by the Indian government in 1989 and artists began using camel bone and acrylic as substitutes.

Originally, most artisans hailed from Bassi Gulam Hussain and Boothgarh villages and the art was passed from generation to generation. Not more than 70 artisans are practising this craft at present. To motivate them and prevent the art from dying, the government started National Awards Completions in 1965. Till now five craftsmen have been given the awards for inlay work. The famous Albert Hall Museum in Jaipur also houses some rare ivory inlay treasures of Hoshiarpur from the 19th Century.

How is inlay work done?

The first step for inlay work is readying a pattern to be designed on a piece of paper. Earlier drawings were hand-drawn, however, computerised prints are used for tracing these days. The motifs in the design chosen can be geometrical or floral or traditional. This design is then copied on the wooden material as well as acrylic sheet by tracing it using an ink. Following this, begins the etching on wood with the help of sharp tools. By etching 2-3 mm depressions are created which would hold the inlay piece. Sharp knives are used to cut the motifs out of acrylic sheets. Each piece is glued on the wood. As soon as the pasting is done, they are subsequently rubbed with sandpaper to give it a smooth finish. After all pieces have been done and smoothened, the next in the line are finishing and polishing which prolongs the piece’s life.