Despite major financial constraints and three disabled members residing at Sahaura Dadial village in Mukerian, their subsidised ration scheme has been cancelled by the government for the past 1.5 years, reports Deepkamal Kaur 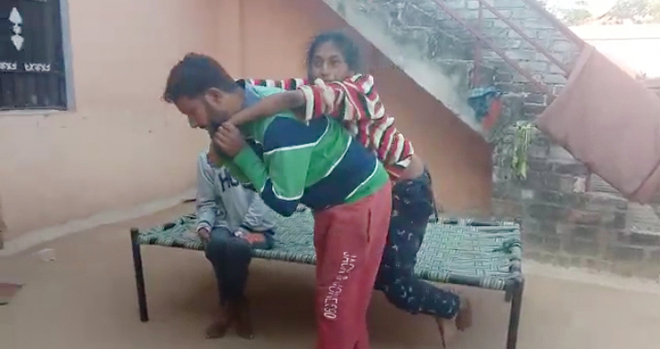 Surinder Kumar carries his younger disabled sister on his back in their house at Mukerian in Hoshiarpur. Tribune Photo

Life of Surinder Kumar (32) is an ordeal. Eldest of the four siblings residing at Sahaura Dadial village in Mukerian, he has to take care of all his two younger sisters and a brother, all of whom are suffering from muscular dystrophy. His wife, mother and two kids are also dependent on him financially. A lone bread-earner, he has to fend for a family of eight members.

Surinder has no regular job. He does whatever labour work he gets on daily basis. “While on some days, I get to wash utensils at a marriage function or any other such work, there are days when there is no work,” he says as he dedicatedly looks after every family member.

He shares his routine. “I start waking up by siblings early morning as they are physically dependent on me completely. Neither my wife nor my mother can bear their weight and carry or them around much. So I take them to the washroom one by one and freshen them before I leave for work. My wife Rekha Rani and my mother Suhag Rani cook food for them. On some days they can eat food themselves but many times they have to be spoon-fed.”

Adds Kumar: “All three of them were in this condition right from their birth. My parents tried to get them treated from various hospitals, including PGI in Chandigarh, but they were told that there is no treatment available for them. My father Sarwan Kumar used to took care of them all his life till he expired in January this year. He was an additional earning hand in the family too. After his demise, their responsibility fell on me completely. My mother, too, has become weak owing to heart ailment”.

Kumar has a pucca house. “The villagers are quite compassionate for us. Our previous house structure was weak and rainwater used to seep in. They helped us financially so that we could rebuild the house and make a verandah of concrete as well. But the real problem as of date is of the daily struggle to earn as much to feed my family and fulfil their basic needs.”

They get four monthly pensions of Rs 1,500 each as old age allowance for Surinder’s mother and three disability allowances for each of his sibling. “But Rs 6,000 and my meagre daily income is not enough to feed eight mouths, pay fee of my school-going children and buy daily dose of medicines for all four of them,” he rues.

Despite its poor financial condition, the subisidised ration scheme for the family got cancelled about 1.5 years back. “Our names were deleted from the list of the beneficiaries under the Blue Card scheme. I have met the officials and local politicians a number of times. Every time I go, they make me fill up a form. But nothing happens after that. But till date the supply of atta-dal has not come to us,” he rued.