Upasana Singh launches her son Nanak Singh with Punjabi film Bai Ji Kuttange, which she promises will be a laugh riot : The Tribune India

Upasana Singh launches her son Nanak Singh with Punjabi film Bai Ji Kuttange, which she promises will be a laugh riot 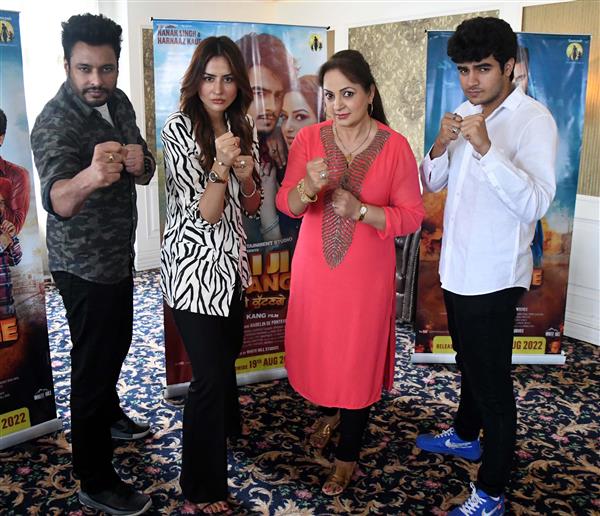 Drama, comedy, action, romance... When actor Upasana Singh decides to turn producer, she promises an out-and-out entertainer. Bai Ji Kuttange is her debut production and Upasana insists that taking up the new role has been a great learning experience —khatte, mithe te kadwe.

The film also marks the debut of Nanak Singh, and that makes Upasana a proud mum! Why in Punjabi? “That was Nanak’s call. I asked him whether he would like to debut with a Hindi or Punjabi film, and he chose the latter. He was like, Mummy you started with a Punjabi film and so would I.” The mother-son, apart from their mutual love for movies, are also confirmed animal lovers. If growing up in Hoshiarpur, Upasana had 22 birds and animals, including cats and dogs, Nanak too brings any strays he finds in need of help home. “But he just plays with them, the care part falls on my shoulders,” says Upasana.

Upasana has worked not just in Hindi cinema, but also many regional languages along with TV. “Through my journey, I have believed that if my work can bring a smile on anyone’s face… That’s all I want. Life’s rather tough, so a dose of laughter is what we aim for in the film; it has all - drama, action and comedy!”

Bai Ji Kuttange is helmed by Smeep Kang and also stars Dev Kharoud, Harnaaz Kaur Sandhu, Gurpreet Ghuggi, Upasana Singh, Sabby Suri and Hobby Dhaliwal. Kharoud has established himself as an action star, “I am glad for this film lets me explore romance and comedy, alongside action. My audience loves me as an action star, but I would like to try other genres too.”

Nanak plays Bai ji’s younger brother. “Kang sir has written a beautiful role for me; it helps me bring out different strands,” says Nanak, who loves to dance and is trained in different forms, right from ballroom, ballet, contemporary hip hop to jazz. “He gets to show his dancing skills in the film,” shares Upasana. She also shares how her boy got the name Nanak. “It was given by my mother because when he was a very serene child and never cried.” The name came with its set of rules, “Now that he is named Nanak, I can’t scream his name, at times I call him Nanak ji.”

The film, which was shot through the pandemic, presented its own set of challenges. “Once just three days of the schedule were left, but the shooting had to be stopped.” Also, the film’s promotions led to a tiff with the actor, Miss Universe 2021 Harnaaz Kaur Sandhu. “I had never gone to court, but Harnaaz did not honour promotion commitments.”

The film is scheduled to release on August 19 and Upasana is looking forward to it. “It’s a beautiful film.”