The pangs of migration : The Tribune India

The pangs of migration

As the cast of the new show indulges in Dil Diyaan Gallaan, we get to re-look at Punjab and its culture through the eyes of Pankaj Berry & Sandeep Baswana 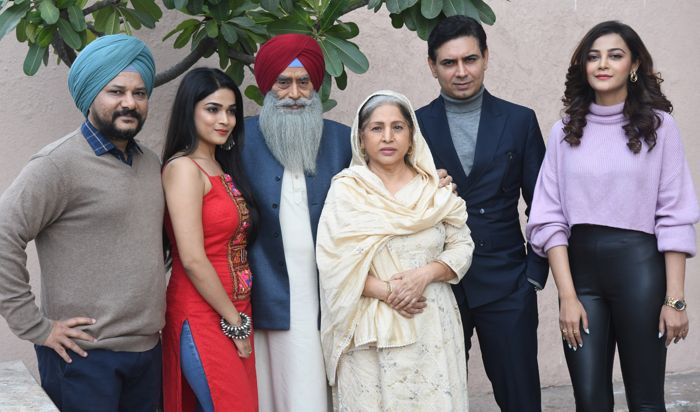 The launch of Sony SAB’s new show Dil Diyaan Gallaan was held in the City Beautiful on Wednesday. With the backdrop of Hoshiarpur, Punjab, it’s the story of three generations of a family torn apart due to migration. The show will premiere on December 12.

Starring Pankaj Berry, Sandeep Baswana, Ravi Gossain, Jasjeet Babbar, Kaveri Priyam and Hema Sood, the cast was all smiles after their initial shoot in the heart of Punjab.

Wearing a long grey beard and turban, actor Pankaj Berry was unrecognisable and easily passed off as the head of the family Dilpreet Brar, the character he is playing in the show. On his transformation, the Ambala-born actor says, “I wanted to do justice to my character. I have great respect for the Sikh religion and aware of the respect the turban demands. The beard also looks natural. It took me three months to prepare for this role.”

His conviction in this relatable story of migration is such that he claims, “Dil Diyaan Gallaan will remind you of cult shows, Buniyaad and Tamas.” From playing clean shaven and bald Tathacharya in Tenali Rama to now playing Dilpreet Singh, the actor says that it was his zeal to bring out something new with each new project that has made him choose different characters.

As the show highlights the predicament of many families in India who are distanced from their loved ones due to migration, misunderstandings and unspoken words, Pankaj becomes emotional as he talks about his son who is about to leave for Canada for higher studies. He says, “Due to Covid, his visa process got delayed and now he will leave next year. Although I am happy that I get to spend more time with my son, but of course on the surface I have to show I am heartbroken because of the delay. I understand that kids have to do their own thing. I also know that going for studies is a part of setting in Canada. The show doesn’t paint anybody wrong or justify the stance of the new generation.” Little wonder Berry connected with the role instantly.

During their stay here in Punjab for shoots, the cast had enjoyed eating in villages and breathing the fresh air.

For Sandeep Baswana, who hails from Haryana, it’s not something new but shooting closer to home made the process more of a work-vacation. Sandeep, who plays Mandeep Brar, residing in the US, says, “Often people blame the one who leaves his family without understanding their reasons. I am excited about playing this character as it brings out the perspective of those who leave their homes forlivelihood and how difficult and painful it is for them.”

On the recent trend of casting, Berry shares how Shyam Benegal would never take an audition. During a scene, he would suddenly say, “You would be Ashvathama, Bharat or Harshvardhan.”

It was a collective discussion between the channel and us which made way to produce a show on this unique subject of migration. The special connection that made me choose Punjab as the backdrop is because my father also hails from Chandigarh. he completed his education in the city but work took him away from this place. – Rashmi Sharma, producer

I have great respect for the Sikh religion and aware of the respect the turban demands. The beard also looks natural. — Pankaj Berry, actor

I am excited about playing Mandeep as he brings out the perspective of those who leave their homes. — Sandeep Baswana

I play Amrita, who is very similar to my real self. She is always looking for ways to adapt to the changes. — Kaveri Priyam