In a viral clip, the bride stops midway to dance on ‘Nachdi Phira’ to express her love for the groom 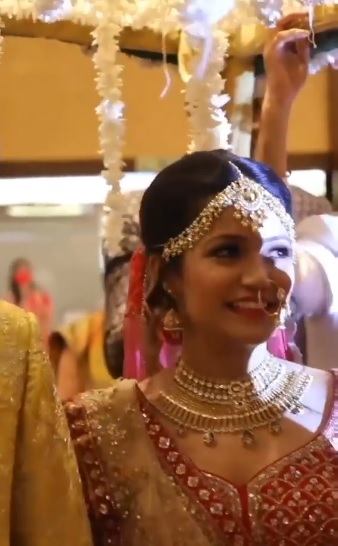 A still from the video. Instagram/happyframes_

Big fat Indian wedding is a known phenomenon around the world. The festivities and rituals associated with an Indian wedding have inspired many to walk the isle Indian style. As part of the endless celebrations, dance performances by the families of bride and groom are a regular but what when the bride comes up with an impromptu dance performance to express her love for the groom? Yes, that’s what this bride did as she dedicated a dance performance for her beau right as she made an entry to the wedding venue.

All dolled up, in a video that has gone viral, a bride can be seen dancing to the popular number ‘Nachdi Phira’ from the movie ‘Secret Superstar’. Everyone has been praising her performance.

Here’s the video shared by Instagram user Happyframes. Its caption reads, “Dance on your favourite song while entering on your wedding day?”

Walking towards the stage, the bride is surrounded by her family members when she begins dancing. Showing off some graceful moves, she gestures towards her partner who breaks into a smile seeing his bride’s performance. The clip ends when the bride reaches the stage.

There is another video of the couple where first the groom goes down on his knees for the ring ceremony and then the bride does the same to put the ring on the groom’s finger.

The charm on their faces is winning them compliments and many emojis.