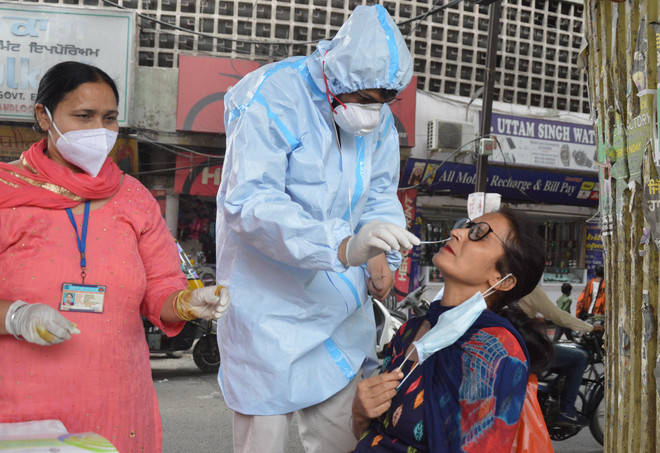 A woman being tested for covid by the mobile team of the health department.Pic by: Inderjeet VermaStory by: Manav--

As many as 778 persons tested positive for Covid, while five persons lost their lives today. Total positive cases from the district till now have reached 44,599, while death toll has reached 1,258. Active cases in the district today reached to 5,029.

On Sunday both Urban Estate Phase I and Phase II were declared containment zones and the areas were sealed after 70 cases were reported from here.

Residents of the areas were counselled for mandatory testing. People usually go for test only when they come in contact with a Covid positive person or have any symptoms. But people should understand that they have to come forward to give samples regardless of their symptoms or contact. The testing facility by the Health Department is completely free, Dr Avinash Jindal, SMO, ESI Hospital, Ludhiana, who is taking care of the sampling in Urban Estate, said.

Those who tested positive today include three healthcare workers and an undertrial. As many as 174 persons have not been traced so far.

Today 23 persons were on ventilator support, out of which 16 are from Ludhiana district and remaining from other districts.

As many as 7,282 samples were collected from the district and report of 475 is yet awaited.