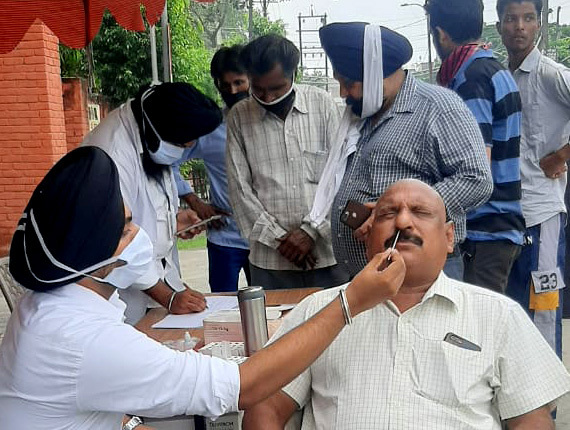 A man gets his Covid test done in Ludhiana. Inderjeet Verma

Ludhiana, which had made a remarkable turnaround from being the worst-hit to the safest district in the state, has reported two Covid cases from a single locality in the past 14 days, the government has confirmed.

While Ludhiana has only one such locality that had reported two cases in the fortnight, seven districts have reported two or more infections from same multiple localities, the official figures have revealed.

The locality-wise data analysed by the Health and Family Welfare Department, a copy of which is available with The Tribune, showed that Akal Garh Market in Ludhiana had reported one Covid case each in the past three days and seven days, taking the count to two in the past 14 days.

We have been keeping a constant vigil on localities and pockets that remained prone to the virus surge in the first two Covid waves. Strict precautionary measures and enforcement have helped keep the situation safe. —Varinder Kumar Sharma, DC

The state-level figures indicated that 93 cases were reported from single multiple localities in 13 districts in the past 14 days, 53 in the past seven days, and 18 in the past week.

Expediting the testing mechanism and reducing the reporting time, all 22 districts are now issuing reports of RT-PCR tests within 24 hours. Earlier, the RT-PCR test reports used to take two to three days’ time.

State-level official data revealed that the reports of all 29,458 RT-PCR tests conducted across 22 districts, with a maximum of 5,021 in Ludhiana, were issued within 24 hours.