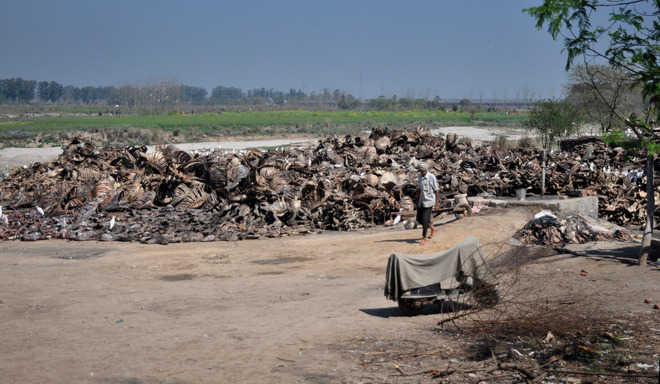 Carcasses of cows and buffaloes are lying in a highly decomposed state at various dairies, gaushalas and residential areas of the city as skinners have refused to lift them for the last four days in protest against the notices issued to them by the Punjab Pollution Control Board (PPCB).

The PPCB issued notices on February 27 to five skinners and imposed Rs 11.40 crore environmental compensation charges on them (Rs 2.28 crore on each) for allegedly discharging effluents from “hadda roddi” (place where carcasses are skinned) near Ladhowal into the Sutlej. On getting the notices, the skinners and their workers went on strike and stopped lifting carcasses from the city.

The dead cattle infested with worms are not only polluting the area but are becoming a serious health hazard. There are over 1,000 dairies on the Tajpur Road and Hambran Road in Ludhiana, and they supply milk to several parts of the city.

Nearly 15 carcasses of cows emitting stench are lying at Govind Gau Dham, one of the biggest gaushalas of the city. The gaushala authorities have urged the government to resolve the matter at the earliest. The carcasses are not being lifted from the residential areas too.

The pollution control board has asked the skinners to make arrangements for the disposal of the effluents.