Halwara international airport to be operational by October 31 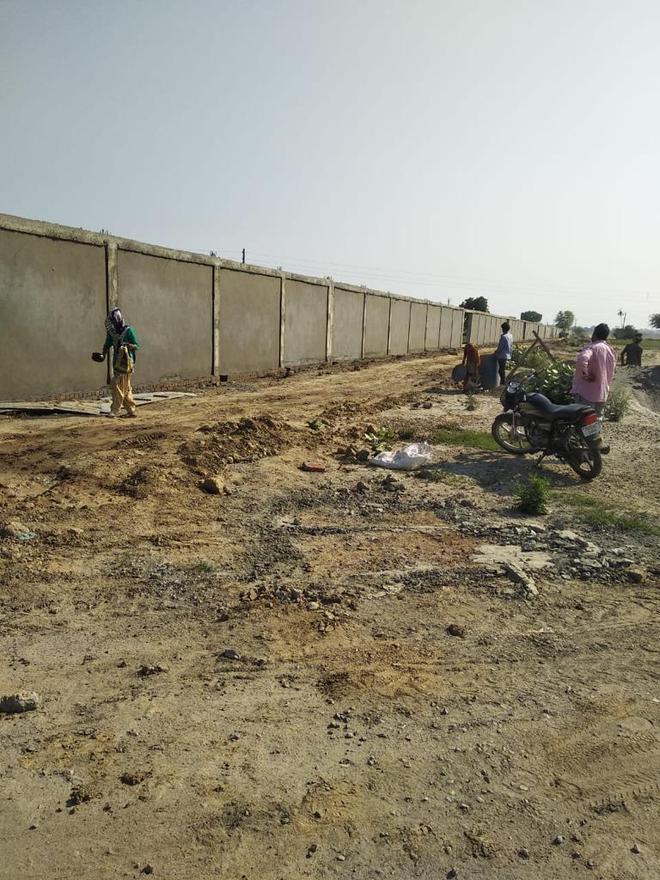 Boundary wall of the upcoming airport at Halwara nears completion.

Come November, Ludhiana, known as the Manchester of India, will have its own international airport. Coming up at the Air Force Station in Halwara, which is one of the oldest frontline airbases of the Indian Air Force (IAF), the facility will be made operational by October 31.

A decision to this effect was taken at a high-level meeting, chaired by the Chief Secretary, Vini Mahajan, recently.

Confirming the development, the Chief Secretary told The Tribune that based on the advice of the Airports Authority of India (AAI) to the Punjab Civil Aviation Department, two separate tenders — one for the construction of new terminal building and other for the apron — will be floated.

“The PWD has been directed to float the tenders immediately and the same will be awarded after requisite approval from the AAI,” she said.

Mahajan disclosed that the entire funds of Rs 43 crore estimated to be spent on the new airport terminal and apron would be spent by the GLADA and later reimbursed by the AAI.

“Operations from the new airport will be started at the earliest in consultation with the AAI,” added the Chief Secretary, who reviewed the progress of the project at a virtual meeting of the Public Investment Management (PIM) committee on the infrastructure development projects under implementation in the state.

She directed the officials concerned to ensure that the project was completed as per the approved specifications and within the stipulated timeframe.

Sharing the progress report of the ongoing work on the project, which has been marked as project of key concern on the directions of Chief Minister Capt Amarinder Singh, Deputy Commissioner Varinder Kumar Sharma said over 95 per cent construction of boundary wall at the Halwara airport had been completed and it was expected to be completed on schedule by June 10.

Similarly, 90 per cent construction of the approach road to the new airport had been completed and was expected to be completed on schedule by June 15, he revealed.

The tentative cost of the civil terminal conclave to be spread across 135 acres, worked out by the PWD, was brought down from initial Rs 58 crore to Rs 43 crore after consultation with the AAI and approval by the Technical Adviser to the CM.

The decision to build a new international airport in the Maximum City of Punjab was taken after the state government had raised the demand with the Centre sometime back following which the AAI conducted a pre-feasibility study of the Halwara IAF station and gave nod to set up international civil enclave here to meet the growing demand for civil flight operations.

The existing Ludhiana domestic airport at Sahnewal will be closed once the flight operations commence at the new civil enclave in Halwara.

The project entails building an interim arrangement to attend immediate requirements to make international flights available to the residents of Ludhiana, which was the state’s largest industrial and business city with a population of nearly two millions, by the end of this year.

The interim terminal building will be pre-fabricated steel structure with modern outlook, spread over 2,000-sq km area with 3,800-sq metre canopy space having a seating capacity of 300 passengers. The PWD (B&R) was the main executing agency, while a private firm was hired for architectural design of the project.

The scope of the project includes a new terminal building along with the ancillary facilities like apron taxiway extensions, substation, boundary wall and approach road.

“The terminal will be a state-of-the-art building as per norms and requirements of the AAI, while construction of apron will be suitable to park one AB321-200 type aircraft and widening of taxi track and car park will accommodate 75 cars,” the DC revealed.

Besides the flight information display system with adequate number of display devices in departure, arrival and security hold area for passenger facilitation, an adequate number of X-ray machines for scanning baggage with required number of security equipment will be installed as per the AAI norms.

Before the construction of a regular terminal, an interim building will come up to begin the airport operations here, informed the ADC (Projects), while adding that 161.28 acres of land, comprising 135.54 acres for airport and 25.74 acres for future development, had already been acquired.

She revealed that an alternate approach road to the airport from the Delhi-Katra Expressway was also under proposal by the National Highways Authority of India (NHAI).