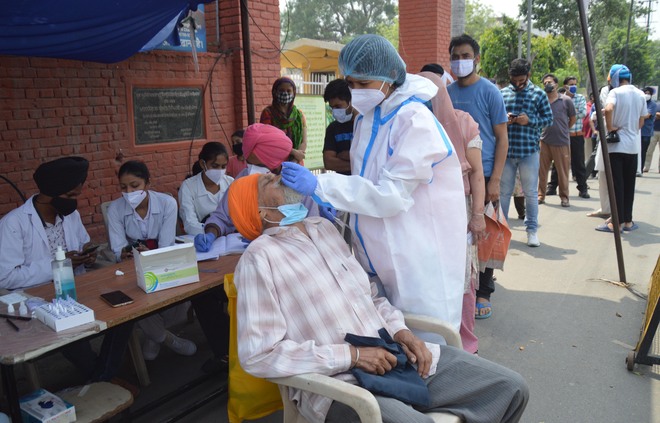 A person giving his sample for covid testing.

The district breached all its previous records as 30 persons lost their lives to Covid in 24 hours. This is the highest death toll since the outbreak of Covid. The total death count from Ludhiana district today reached 1,580. As many as 1,470 persons tested positive for Covid.

As many as 19 women and 11 men, belonging to different parts of the district, lost their lives.

As many as 56 persons — 41 belonging to Ludhiana and 15 to other districts —were on ventilator support.

Civil Surgeon Kiran Gill said as per the latest directions of the Deputy Commissioner, curfew would be in place from Monday to Friday from 12 noon to 5 am the next day and there would be a complete curfew from Friday 12 noon to Monday 5 am. Only certain essential services and activities are allowed during the curfew.

She added that no government wanted to close its state or territory but in this difficult time, the Deputy Commissioner had decided to impose curfew, which was the best decision for the safety of the people.

Immediately acting upon this, Deputy Commissioner Varinder Sharma sent a team to the hospital to take stock of the situation. On reaching there, everything was found in place and the hospital had ample stock of oxygen cylinders as well.

After this, Deputy Commissioner went live on Facebook on the official page of the DPRO, Ludhiana, and clarified that the news about the death of five Covid patients was completely baseless and fake.

“No patient has died due to a shortage of life-saving gas. These deaths have been reported due to Covid-19,” said the DC.

The Deputy Commissioner said the private hospital mentioned in the fake news on social media was receiving 150 oxygen cylinders daily and it had sufficient stock of the life-saving gas even now.

He made it clear that there was no oxygen shortage at all in Ludhiana, despite rise in the Level-III patients.

He appealed to the people to not pay heed to rumours and ordered the Commissioner of Police to take strict action against those spreading such false news and creating nuisance and fear among the people during such sensitive times.