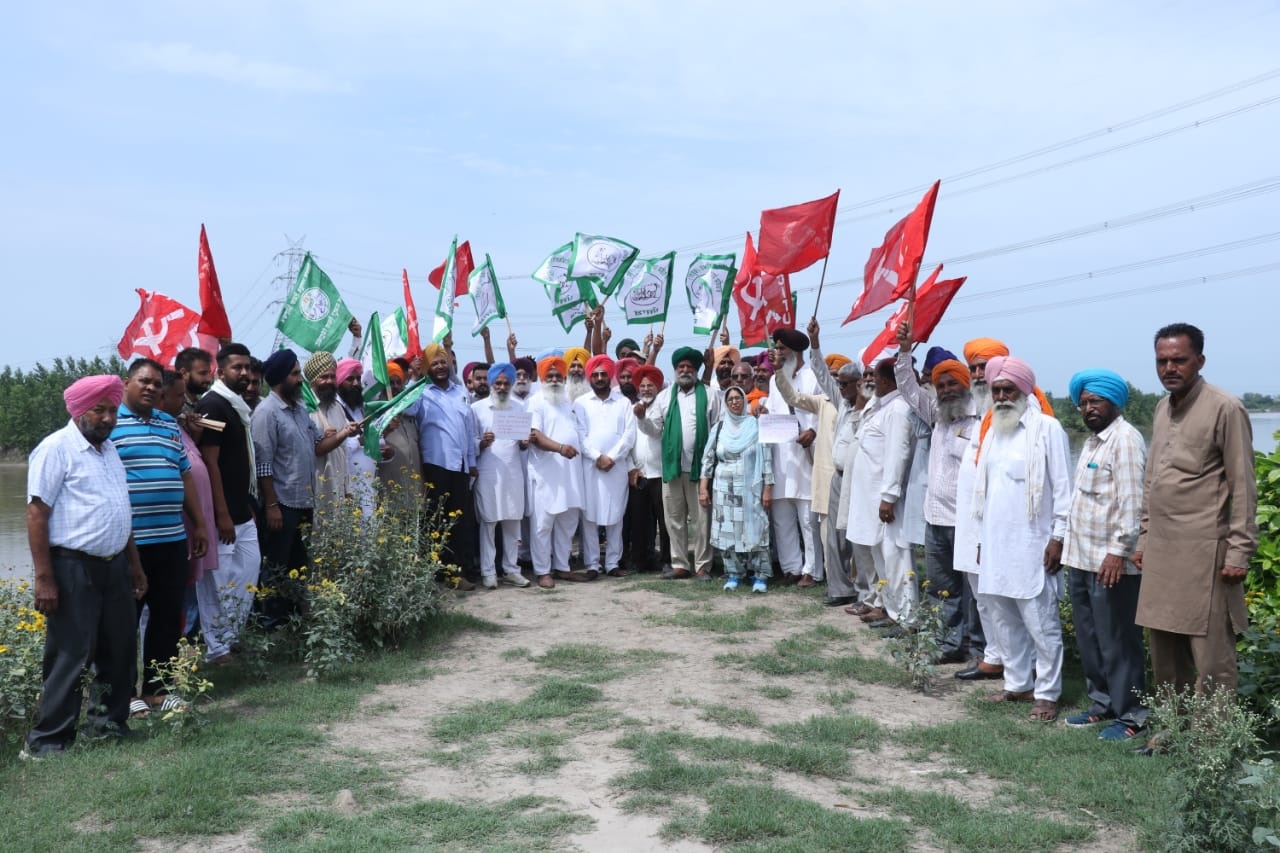 Members of BKU (Charuni) and other organisations hold a protest near the Sutlej bank. Tribune photo

Now, Bharatiya Kisan Union (Charuni) and some other organisations have opposed the state government’s proposed textile park, to be set up on around 1,000 acres near Mattewara forest and Sutlej.

On Wednesday, members of the BKU (Charuni), Centre of Indian Trade Unions, MGNREGA Adhikar Andolan, Bhatha Mazdoor Union, Nambardar Union Punjab and MGNREGA Mazdoor Union gathered near the bank of the Sutlej to mark their protest. They said if any such textile industry was set up there, it would be harmful to the Mattewara forest and Sutlej.

By raising their voices to save water and the forest, the BKU (Charuni) and other organisations criticised the AAP government’s move regarding the proposed park near the forest and river. They said no such textile park should be set up in villages near the river and forest.

The BKU (Charuni) members have also announced to extend their support to the rally to be held on July 10 near Sutlej Bundh and Mattewara forest. The call of public rally has been given by the public action committee (PAC) to save the Mattewara forest and Sutlej. A number of other farmer and social organisations have also announced to extend support to the PAC.

State president of BKU (Charuni) Dilbagh Singh Gill said it was wrong to set up textile park in villages along the river and the people of the state should fight against any such move of the government. “Our union supported the public action committee’s call to save the environment,” he said.

The organisations also raised questions over the role of Chief Minister Bhagwant Mann. When Sekhowal village land was acquired for the proposed industrial park during the regime of the previous Congress government, Mann and other AAP leaders had then opposed the move.

Amarnath Koomkalan, state secretary, Centre of Indian Trade Unions, said after following legal proceedings for decades, the land was handed over to panchayats of Sekhowal and Haider Nagar. Now, the panchayat land had been acquired for the industry by ignoring the voice of people who were dependent on such land, he said.

Satpal Singh of BKU (Charuni) said no such textile or any other industry, which was harmful to forest and river, should be set up on land of Sekhowal and adjoining villages near the forest and river. He said the land could be used for planting aloe vera, soybean and trees having high medicinal value or for agriculture-based and environment-friendly industry that would be beneficial for farmers and labourers.

Notably, the Shiromani Akali Dal has also announced its support for the July 10 protest, announced by the public action committee of 50 NGOs to demand the Aam Aadmi Party (AAP) scrap its decision to establish the textile park.

PAC members have demanded from PUDA to scrap the detailed notice inviting tender (DNIT) for environmental impact assessment of the proposed textile park. Col CM Lakhanpal (retd) and Jaskirat Singh, members of the PAC, have written a complaint to PUDA in this regard.

They alleged that there were gross irregularities in the tender regarding environmental impact assessment. “There are extremely serious flaws in the document and the tender needs to be scrapped immediately. A fresh DNIT should be prepared with proper terms of reference and details of works, maps of site locations and full details of services to be rendered,” Jaskirat said.