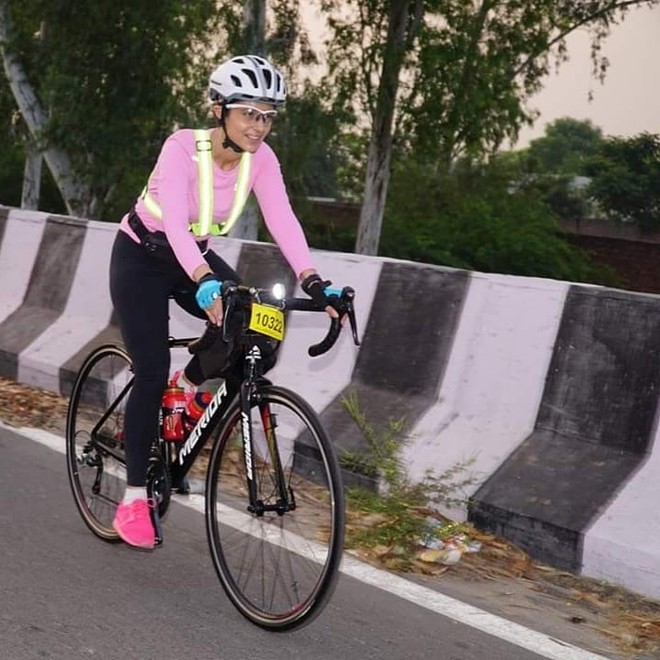 Meet Sameera Auluck, a young businesswoman from Ludhiana, who has done the city proud by grabbing the title of Super Randonneur on World Bicycle Day. A Super Randonneur is someone, who has completed 200 km, 300 km, 400 km and 600 km in one year.

In a chit-chat with Lifestyle, Sameera, a mother of three kids, says, “We began as a group of girls getting together on Sunday mornings, waking up at 4:30 am, missing the usual weekend parties just to enjoy the fresh morning air and the freedom you feel when you are on your bicycle. I started with a basic bike four years ago, exploring the green fields and roads on the outskirts of Ludhiana”.

She adds that when she started enjoying her ride, it became a routine. After some time, she took part in a race organised by @decathlonsportsindia from Ludhiana to Phillaur and won the second prize. It boosted her confidence. And then, there was no looking back.

Last year, she came second in mountain biking organised at the Lawrence School Sanawar (Tour de Sanawar). All this was encouraging and one fine day she was introduced to the world of Randonneuring. She did her first ride, Ludhiana-Chandigarh-Ludhiana completing 200 km. Then it was a 300 km ride covering Ludhiana-Zira-Harike-Ludhiana.

“The 400 km ride from Ludhiana-Wagah border-Ludhiana was an exciting one. This ride was dedicated to the martyrs whose lives were sacrificed in the Pulwama attack in February 2019. And then finally came the dream ride— Ludhiana-Delhi-Ludhiana covering 600 km in 36.5 hours and I became Super Randonneur from Ludhiana,” she says. She has also qualified for #Paris Brevet that happens every four years in Paris in association with Audax Club Parisien.

“I am running my designer studio and have three kids, who also need my attention. But God has given women great power and they can make a difference. They can achieve anything. At the same time I thank my stars and my family who have always been my greatest support all the time,” said Sameera.