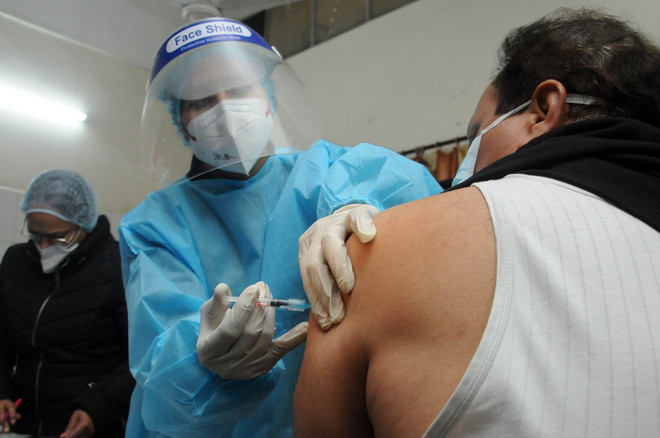 Ludhiana, which had assumed the dubious distinction of being the ‘Covid capital’ of Punjab due to maximum cases and deaths, has topped the state in the ongoing first phase of the vaccination drive.

Against the state’s dismal inoculation rate of 31.26 per cent recorded in the first three days after the nationwide campaign was launched on January 16, Ludhiana covered the highest 57.22 per cent targeted beneficiaries till January 19.

As many as 887 healthcare workers from both government and private sectors got the jab against the target of 1,550, while Punjab vaccinated 5,567 of the targeted 17,808 beneficiaries.

The drive picked up on Wednesday with the coverage rate shooting up to 56.77 per cent. Since the government health centres were closed for the day due to public holiday, 34 session sites were created in private hospitals where 2,003 of the day’s targeted 3,528 registered priority members were inoculated. To give further momentum to the programme, the health department has created more than 300 session sites in the state for Thursday.

“We will begin the inoculation drive at all community health centres, subdivisional, and district civil hospitals besides over 100 private hospitals from tomorrow,” said Hussan Lal, Principal Secretary, Health and Family Welfare.

After visiting a private hospital in Faridkot to oversee the ongoing vaccination, Hussan said the manifold increase in the number of session sites from Thursday would raise the coverage rate considerably.

“We are committed to vaccinating and protecting all 1.8 lakh registered healthcare workers in the first phase,” he said. Attributing the lukewarm response to glitches in CoWin application besides hesitance and apprehension among healthcare workers, Hussan said senior doctors such as civil surgeons and SMOs were coming forward to get themselves vaccinated and motivated their subordinates to get the jab.